Beating Around the Bush 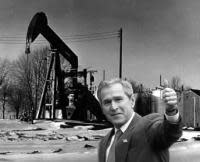 So: If there's one thing I never tire of doing....it's beating up on George W. Bush's record on global warming--which usually involves exposing the ridiculous lies and deceptions the administration has cooked up over the past six years so as to misrepresent either a) the science; or b) what the president/administration has said about the science. And here comes my latest thrashing: Entitled "Beating Around the Bush," it's now up at DeSmogBlog. Money quote:

Many others will tell you that even if Bush now accepts the science, he isn't contributing helpfully to the policy mess anyway with his continuing insistence on voluntary action to address global warming. I certainly don't disagree. But if that's not what I choose to emphasize, it's for this reason: I still can't get over the dishonest, wrongheaded, and frankly immature behavior of this administration over the past six years regarding climate science. Bush's concession now only seals the case: He has been a deeply and disastrously irresponsible president.