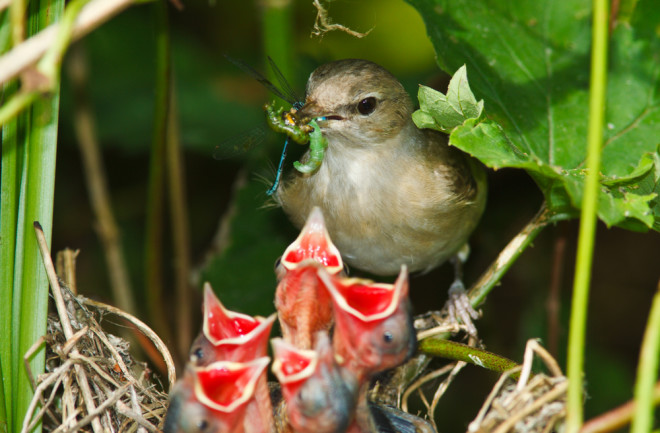 Garden Warbler (Sylvia borin) by a nest with baby bird. Image courtesy of Vishnevskiy Vasily/Shutterstock Baby birds appear to be pretty helpless creatures, cheeping incessantly and stretching their featherless necks out of the nest to get food plopped directly in their mouths. But when hunger strikes and the nest's cupboards are empty, what's a baby bird to do? Certain species, like the pied babbler, have figured out a way for young birds to blackmail their caretakers in order to get more food. All the adults in a pied babbler community share the burden of breeding and feeding their collective offspring. For the first few months of their lives, baby pied babblers rely completely on these adults to keep their tummies full. Once the baby birds reach their fledgling stage, kind of like our awkward teenage years, the birds have a little more control over their bodies, but still not enough to fly or feed themselves. And like teens, when the young birds disagree with their parents, they start taking risks. When they want more food, for example, researchers found that the young birds leave the nest early. Now new research shows that this decision is partly made with an eye toward manipulating mom and dad. Since adults do most of their food foraging on the ground, the young birds get fed much more by adults when they abandon the nest, according to a study published in Proceedings of the Royal Society B this week. These extra calories may just be because the young birds are closer, making feeding less of a hassle for the adults. But proximity is apparently not the only thing parents are rewarding. The study found that parents that heard recorded alarm calls of other species (signalling a possible predator in the area) nearly doubled how much they fed to ground-based babies, while feeding nest babies no differently. The authors speculate this is in part an attempt to get at-risk babies to move back to the safety of nearby bushes since the young birds don't take as many risks or behave as dangerously when they are full. From the youngster's perspective, though, they might be paradoxically more inclined to leave the nest when the danger to them is the highest, since their manipulative powers to get more food are also strongest at that point.

Pied babbler (Turdoides bicolor). Image courtesy of Ian n. White/Flickr By choosing the ground over the nest, the rebellious young birds are putting themselves in danger, which puts the pressure on the adults to feed them more to make sure they steer clear of danger. These results support a larger theory of blackmail that researchers believe young animals use to get what they want. Luckily for adult babblers, this rebellion doesn't involve any tattoos, piercings or experimental drugs.