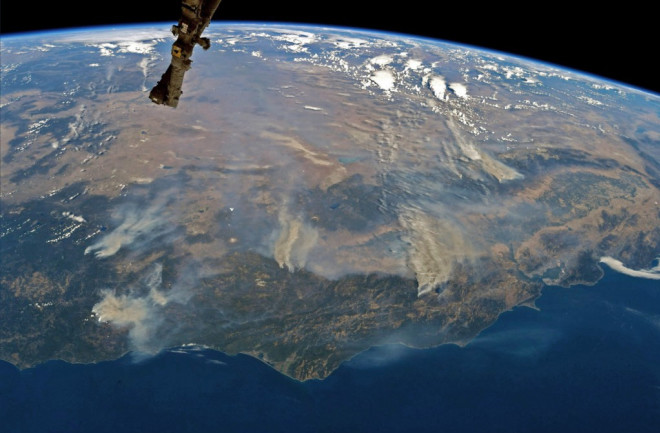 (Credit: NASA) From nearly 300 miles up, you can see California’s massive forest fires blowing smoke and ash east from the US west coast. The area in this image stretches more than 500 miles from southern Oregon (left) to San Francisco and the Sierras (at far right). Astronaut Ricky Arnold captured the scene from the International Space Station and posted the photo on Twitter on Monday, Aug. 6. Among the largest fires are (from left) the Taylor Creek and Klondike fires in Oregon, the Carr at center, the massive Mendocino Complex, and at far right, the Ferguson and other fires just west of Yosemite National Park. Nationwide, more than 28,000 firefighters and support staff are battling over 100 fires that have burned some 1.6 million acres. Just two of those — the Carr fire and Mendocino complex, have charred more than 400,000 acres, or 625 square miles. For context, you can see the scale of the smoke by comparing the top image to this one from Google maps.