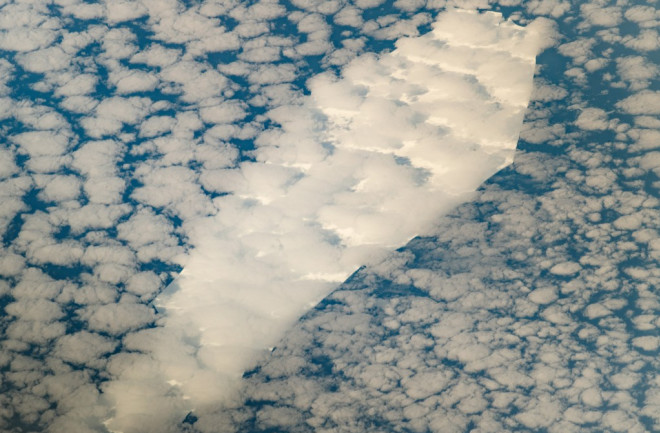 Source: NASA Earth Observatory. Seriously, this gargantuan coffin-like object really was photographed by an astronaut aboard the International Space Station on September 23, 2018. If you guessed that it is an iceberg, you are right.

A broader view of B-15T, from NASA's Terra Satellite. (Source: NASA Earth Observatory) Known rather unimaginatively as B-15T, the spooky, Brobdingnagian berg is seen here adrift in the South Atlantic Ocean between South Georgia and the South Sandwich Islands. NASA's Earth Observatory published the photograph today as its image of the day. And the day is, of course, Halloween. NASA didn't offer any statistics on the current size of B-15T. But I measure it at about 31 miles long. That would make it about two and a third times larger than the island of Manhattan. "After 18 years at sea, B-15T has entered a region where Antarctic icebergs go to die," according to NASA. It is actually one child of a much bigger berg. Designated B-15, the parent broke free from Antarctica's Ross Ice Shelf in March 2000. As NASA put it at the time:

Among the largest ever observed, the new iceberg is approximately 170 miles long x 25 miles wide. Its 4,250 square-mile area is nearly as large as the state of Connecticut.

After breaking free, B-15 had many collisions, "smashing back into the Ross Ice Shelf where it originated, hitting bedrock along the coast, and bumping into other tabular icebergs," NASA says. These collisions fractured the ice, producing large fragments with sharply linear edges — including B-15T. "The coffin shape is an accident of time and space, given the approximately 18.5-year voyage of B-15T,” says NASA glaciologist Chris Shuman, quoted in today's Earth Observatory post. “We can only guess at the forces that have acted on this remnant of B-15 along the long way around Antarctica.” Along with other children of the parent berg, B-15T has been riding counter-clockwise on the Antarctic Coastal Current. It has now drifted into a region of relatively warm waters that NASA calls an "iceberg graveyard." This region in the Southern Hemisphere is emerging from winter and heading into the warmer months. That should eventually doom the coffin-shaped berg to a watery demise.