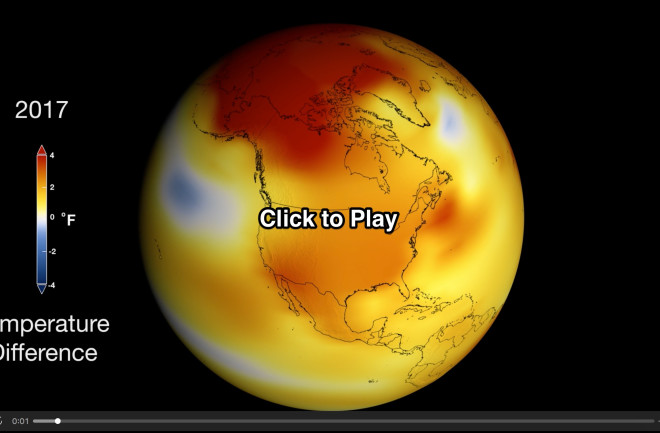 This animation shows how global temperatures in 2017 varied from the long-term average. Click on the image to watch the animation, which shows temperature anomalies in degrees Fahrenheit on a spinning globe. (Source: NASA Scientific Visualization Studio) New research suggests that large parts of the world are headed for record-breaking extreme weather events. At the same time, the U.S. intelligence community has broken with President Trump on the threats posed by climate change and other environmental challenges. Meanwhile, the president is proposing to slash climate science and renewable energy research while boosting investments in oil, gas and coal — the fuels driving global warming. According to the new research, even if nations manage to meet the temperature target they've agreed to in the Paris climate agreement, the planet is likely to see "substantial and widespread increases in the probability of historically unprecedented extreme events." The study was published Wednesday in the journal Science Advances. The Paris agreement commits the 174 countries that have signed it to limiting global warming to no more than 2 degrees C above preindustrial levels. But according to the study, led by by Stanford University climate scientist Noah Diffenbaugh, even with nations' pledges to reduce greenhouse gases under the agreement, the planet will likely shoot through that goal to warming of 3 degrees C. "We find that humans have already increased the probability of historically unprecedented hot, warm, wet, and dry extremes, including over 50 to 90% of North America, Europe, and East Asia," Diffenbaugh and his colleagues concluded. Even before the study was published, the U.S. intelligence community was signaling its concern about the threats to security posed by climate change. "Extreme weather events in a warmer world have the potential for greater impacts and can compound with other drivers to raise the risk of humanitarian disasters, conflict, water and food shortages, population migration, labor shortfalls, price shocks, and power outages," the community concluded in its Annual Worldwide Threat Assessment, which was submitted for a hearing before the U.S. Senate Select Committee on Intelligence on Tuesday. Overall, the assessment concluded that the "impacts of the long-term trends toward a warming climate, more air pollution, biodiversity loss, and water scarcity are likely to fuel economic and social discontent — and possibly upheaval — through 2018. That's right now, this year. These threats will only grow as warming continues. These are not brand new conclusions for the national security world. There is a long chronology of military and intelligence concerns about climate change. As detailed by the co-founders of the Center for Climate and Security, the U.S. military has been concerned about climate change at least since the George W. Bush Administration. Even before that, the Naval War College and other military institutions were warning policy makers of the implications of climate change. Meanwhile, "the intelligence community has also been in the game" since the early 1990s. The current and past assessments of his own intelligence community stand in stark contrast to President Trump's. He has on numerous occasions called climate change a "hoax." In June, he announced that the United States was withdrawing from the Paris agreement. And now we have his proposed 2019 budget, which slashes climate change programs within the federal government. Among the budget's proposed cuts:

So there you have it. The views and policies of the President of the United States fly in the face of the latest scientific evidence pointing to serious risks from extreme weather events such as heat waves, droughts, torrential precipitation and floods, even if we succeed to achieve the targets of the Paris Agreement. They are also an affront to the expert judgement of the directors of the major U.S. intelligence agencies: the Central Intelligence Agency, the National Security Agency, the Defense Intelligence Agency, the Federal Bureau of Investigation, and the National Geospatial-Intelligence Agency, as well as the Director of National Intelligence. And the president's views are also contradicted by decades of accumulating scientific findings — not to mention basic physics that have been well understood for more than a century.