As the Kincade Fire Was Whipped By Hurricane-Force Winds, Here's What It Looked Like From Space 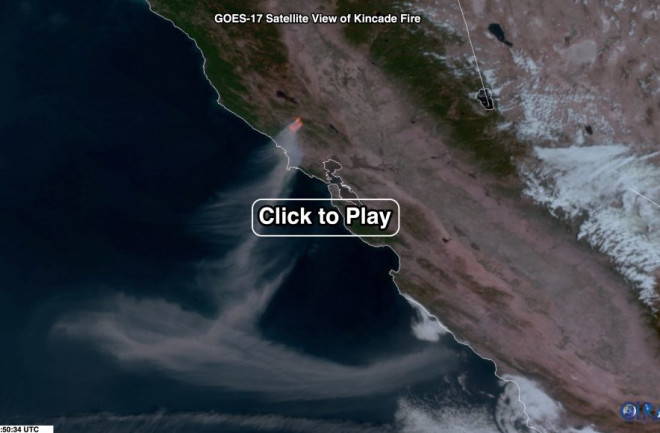 California’s Kincade Fire, as seen by the GOES-17 weather satellite on Oct. 27, 2019. Also visible is a blaze more than 50 miles away in Vallejo, CA — believed to have started from embers from the Kincade Fire.

Early this morning, winds gusted to 93 miles per hour near California’s Kincade Fire.

A Category 1 hurricane is characterized by sustained winds of 74 to 95 miles per hour.

The animation of satellite images above shows the effect of those fierce winds, starting before dawn and carrying on into the daylight hours. It consists of visual and infrared data captured on Sunday, Oct. 27 by the GOES-17 satellite, allowing us to see both the smoke and areas of active burning.

The GOES series of satellites are perched 22,236 miles above Earth’s surface, in geosynchronous orbit.

Here’s another view from space, captured by GOES-16, which has a perspective to the east of its sister satellite:

In a an orbit just 443 miles above Earth, NASA’s school-bus-sized Terra satellite also had a clear view of the Kincade Fire on Sunday morning.

Combining visible and infrared light, the image reveals areas of active burning in orange and scorched land in dark red:

The view of the Kincade Fire from space, as seen by NASA’s Terra satellite on Sunday, Oct. 27, 2019. The false-color image shows areas of active burning in orange, and land that has been scorched in dark red. (Source: NASA Worldview)

The smoke blowing far out to sea in all of these images is emblematic of the ferocious winds that have been raking the region today. Carried by those winds, embers from the blaze in Sonoma County are believed to have ignited a fire 56 miles away in the city of Vallejo.

As of this afternoon, the inferno has destroyed 79 structures, many of them homes, and covered about 30,000 acres. That’s an area equivalent to the City of San Francisco.

The mandatory evacuation zone now stretches from the Mayacmas Mountains northwest of Healdsburg all the way down to the sea, some 30 miles away — including the famous town of Bodega Bay. All told, about 200,000 people have been ordered to evacuate.

The Sonoma County Incident Map of the Kincade Fire as of Sunday afternoon (Oct 27). The mandatory evacuation area stretched some 30 miles, from the Mayacmas Mountains to the Pacific Ocean. Click on the image for the latest interactive version of the map. (Source: California Department of Forestry and Fire Protection)

In coming days, I’ll try to post new remote sensing images of this dangerous blaze, including imagery from other satellites. So I hope you’ll check back.