As the Arctic heads into the warm melt-season, sea ice is tracking at record lows

This animation of satellite images shows sea ice conditions in the Bering Sea. Copious sea ice is seen in the labelled image, acquired on April 4, 2013. The other image, captured on March 26, 2019, reveals very little ice. (Images: NASA Worldview. Animation: Tom Yulsman) As winter gives way to spring in the Arctic, the region's lid of floating sea ice is shriveling much more sharply than normal. According to the National Snow and Ice Data Center's latest monthly update, published April 3, Arctic sea ice reached its maximum extent on March 13, which marked the end of the winter season. Since then, warming spring temperatures have caused the ice to shrink — and lately, the shrinkage has been record-setting. Late-March ice losses in the Bering Sea between Russia and Alaska have been particularly steep, in turn driving the Arctic's overall ice extent to a record low level on April 1, according to the NSIDC. With that in mind, I created the animation above to show just how dramatic the loss of ice in the Bering Sea has been. The labelled image in the animation shows the extent of sea ice coverage in early April of 2013, as seen by NASA's Terra satellite. At that time, ice coverage in the Bering Sea was was slightly above normal. In the second image, acquired by the Suomi NPP satellite on March 26th of this year, note the huge expanses of open water. The copious sea ice seen in 2013 is largely absent. To help you fully appreciate the scale of the losses, consider that the distance from left to right across the middle of the scene totals 1,000 miles. 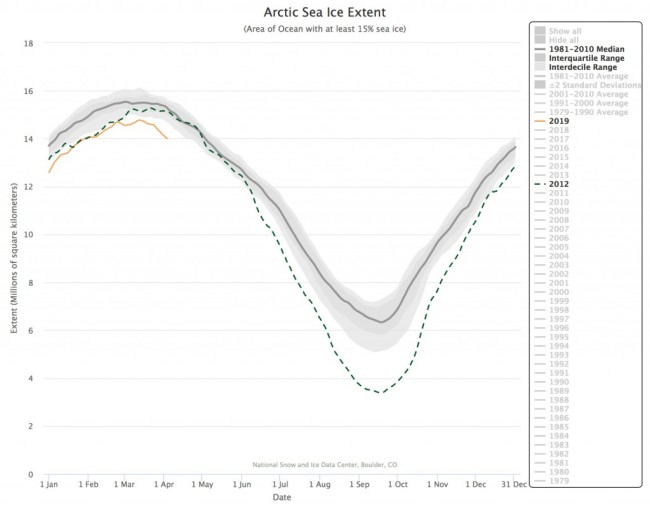 The orange line shows the evolution of overall Arctic sea ice extent during 2019, compared to the median for 1981-2010. The full record for 2012 is also show (dashed green line). For an interactive version of this graph, go here. (Source: NSIDC) The graph above puts Arctic-wide losses in perspective. As the orange line shows, the drop in sea ice after it reached its maximum extent in mid-March has been vertiginous. Compare that to the dashed green line, which shows how conditions unfolded in 2012. That year, Arctic sea ice extent went on to set an all time low. Does this year's early drop portend a new record low this coming September? Only time will tell. But here's something to keep in mind: Ice reflects sunlight back into space, helping to keep temperatures down. By contrast, large open swaths of relatively dark sea water absorb solar energy and warm as a result. This hastens the shrinkage of sea ice. What's happening now is a significant from what was happening during the long winter. "Moderation marked the 2018 to 2019 winter," according to the NSIDC. Air temperatures at roughly 2,500 feet above sea level were actually above average for most of the region. That was also true for the month of March itself. 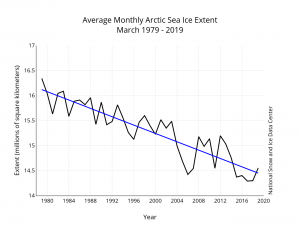 Monthly March ice extent for 1979 to 2019 shows a decline of 2.7 percent per decade. (Source: NSIDC) Even so, Arctic sea ice extent for March continued a long-term decline of 16,100 square miles per year. On average, that means an area of ice nearly twice as large as New Jersey has disappeared each March since record-keeping began in 1979. Thanks to declines in sea ice extent, the season of open water in the Arctic has been getting longer. This, in turn, means snow has less and less time to accumulate on the ice. Less snow cover can slow down the growth of sea ice in fall and winter, and hasten its demise during the warmer weather of spring and summer. This is another way that retreating sea ice, driven by our emissions of climate-warming greenhouse gases, can lead to a self-reinforcing process.