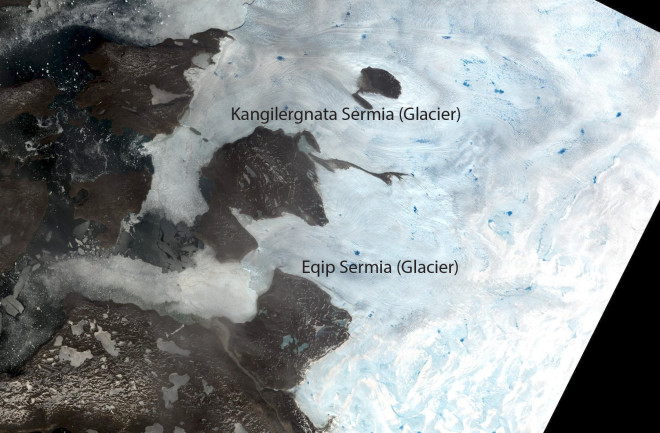 This true-color Landsat 8 image, captured on June 12, shows the edge of the Greenland Ice Sheet on the western side of the island. The blue pockmarks are ponds that have begun to form from snowmelt. In mid-June, seasonal thawing of snow atop the Greenland ice sheet seemed to be taking off, echoing the start to last year's astonishing record melt. Since then, the thaw has slowed, but the pace is still "well above average," according to the National Snow and Ice Data Center. The image above shows one result. Acquired by the new Landsat-8 satellite, it shows the edge of the Greenland Ice Sheet just north of Jakobshavn Isbrae. That glacier is where James Balog's Extreme Ice Survey crew captured the largest glacier calving event ever filmed. The white areas in the image are snow. The light blue and gray areas are where snow has melted to reveal the ice below. And the blue pockmarks are lakes that have begun to form on the ice sheet surface from snowmelt. Here's what the run-off of melt water looked like at the surface near Kangerlussuaq, Greenland on June 17:

Image: NSIDC courtesy Asa Rennermalm, Rutgers University Melting at the surface has been up and down over the past few months. Not much happened in April through mid-May, thanks to relatively cool conditions. A shift in the Arctic Oscillation then brought warm conditions, and by mid-June, a large spike in melting, which saw more than 20 percent of the ice sheet experiencing some degree of surface melt — well above average for that time of year. Since then: cooling and a slow-down. Over the long run, the NSIDC reports that surface melting has been increasing in Greenland. Time will tell whether the summer will bring a continuation of that trend.