As Skies Clear, So Does Clearer Picture of Front Range Flooding 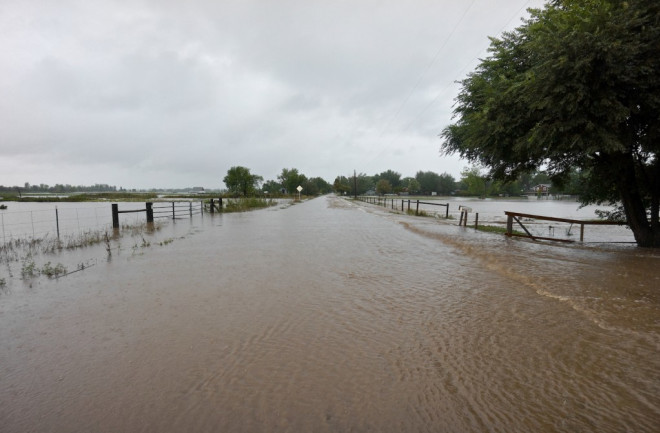 Failure of a small agricultural reservoir caused this flooding near Niwot, Colorado. (Photo: © Tom Yulsman Four hours on end, the water rocketed through the canyons of the Front Range — fissures in the mountains that had themselves been carved in part by torrential floods from melting glaciers at the end of the last ice. The water flows, from what appears to have been a once in a thousand-year rainfall event, were unimaginably powerful. Consider that more than 5,000 cubic feet of water per second coursed downhill at high speed — for hours on end — and then exploded out into the cities and towns at the foot of the mountains. Boulder and Lyons were both particularly hard hit. Many bridges and sections of road have been washed away, isolating people in small mountain towns and raising questions about how long it will take to restore even a semblance of normal life. To get a sense of the sheer power of these river flows, imagine a basketball weighing about 60 pounds. That's a cubic foot of water. So let's do the math... We're talking about 300,000 pounds of water exploding against bridges and roadways — every single second for hours on end. It will take days to fully assess the infrastructure damage that this has caused. (But hopefully not that long to track down the 20 people in Boulder County who are unaccounted for, and one who is definitely missing.) On top of that, consider the countless reservoirs, large and small, that have been swollen by the gargantuan flows. At a press conference this morning, Kara Lamb, a spokesperson for the U.S. Geological Survey, reported that the big reservoirs of the Colorado-Big Thompson Project are all safe. These structures store water for irrigation of about 720,000 acres of land on the plains, as well as municipal and industrial uses. But to insure that they stayed safe, managers had to release water — into canyons and streams already swollen by natural runoff. Meanwhile, the Denver Post has reported that flooding on Thursday blew out six smaller dams, and that a dozen more in Boulder County overflowed. Keep in mind that this was on Thursday. Since then, more rain has fallen, and the streams rushing out of the canyons have poured yet more water out onto the plains. These flatlands are dotted with hundreds and possibly even thousands of small, private agricultural reservoirs. A number of these are known to have failed. From the Denver Post story:

In Larimer County, five small dams in the Big Elk Meadows area failed, trapping a family up a washed-out county road, said John Schulz, a spokesman for the Larimer County Sheriff's Office. When a county emergency services worker hiked in to check on the family Thursday, he saw a wall of water smash through the home's front door and flood the first floor. The family of three and their dog huddled on the second floor and waited to be rescued. The worker left a communications radio with the family to maintain contact.

As of Thursday, the family had not been rescued. Less than a mile from where I live in the small town of Niwot, a small agricultural reservoir has blown out, triggering the flood seen in the picture at the top of the post. That water has added to the rampaging flow of Left Hand Creek, seen below in the photograph I shot yesterday from a bridge in Longmont.

Left Hand Creek swollen by relentless rains rockets across the plains in Longmont, Colorado on Sept. 12, 2013. (Photo: © Tom Yulsman) When you look at this image, consider that this is Left Hand Creek — and at this time of year it is usually just five to 10 feet across and a few inches deep. In the days ahead, I'll share more information and photographs as the full dimensions of what happened become clearer. I'm also very curious about what scientists have to say about possible links to climate change. The fact is that big rainfall events and massive floods are not unknown in this region. Far from it. And the proximate meteorological causes of this event are clear. (I wrote about it yesterday here.) Also, I'm well aware that we should not jump to quick conclusions about connections of a particular weather event to bigger climatic phenomena. All of that said, has the frequency of events like this increased regionally and/or globally? Is there any connection between climate change and stalling weather fronts, which played a big role in this event? The answers to these and other questions may well be "no," or "we're not sure yet." I'll ask the questions and report back what I find out.