Around the World in 80 Days: Electric Car Race Begins

The goal: 80 days, 18,000 miles, no emissions. Yesterday, the Zero Race electric car world tour began in front of the United Nations Palace in Geneva, Switzerland. Four teams--from Australia, Switzerland, Germany, and South Korea--won't actually race one another to cross a finish line. Instead, spectators and experts will determine the winner based on reliability, energy efficiency, safety, design, and practicality, as the tour is meant to show the feasibility of electric vehicles.

The race organizer Louis Palmer won the European Solar Prize after driving a solar-powered vehicle around the world in 2008. He says in a press release that the "race" is against climate change and disappearing fuel.

“Petrol is running out, and the climate crisis is coming… and we are all running against time.” [Zero Race]

The race route cuts through 150 major cities, where spectators can vote for their favorite car design. Judges will decide each individual car's reliability based on the number of repairs it requires during the race; a panel of race car drivers will evaluate the cars' power and speed; and vehicle manufacturers will test the cars for energy efficiency. 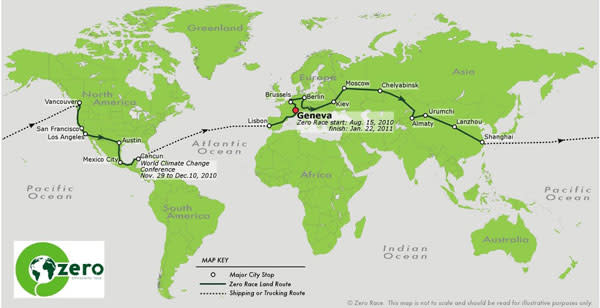 The cars must be shipped over the Atlantic and Pacific Oceans and the race organizers say that they will compensate for emissions from this transport as well as other incidental race emissions with investments into renewable energy projects. Each team cannot use any more power than they have generated or purchased from renewable energy sources. Australian team leader Jason Jones says it will cost only $360 US to power his sleek, light-weight electric car around the world.

"We've already bought the power and put it back in the grid," 57-year-old Jones senior explained, standing next to their plastic-bodied two-seat three wheeler. "We thought it just a great way to show what this car is capable of. The future of automotive transport is not a one-and-a-half tonne gas guzzler." [AFP]

Swiss competitor Toby Wuelser claims his futuristic design can do 350 kilometres [217 miles] on a single charge and reach speeds up to 250 kilometres an hour [155 miles per hour]. "It's like flying half a metre above the ground," he said before boarding the bullet-shaped vehicle and zipping silently up the hill to the starting line. [The Canadian Press]

Car enthusiasts in the United States can catch the vehicles in San Francisco, Los Angeles, or Austin in the fall. After that, the cars will head to Mexico City and then Cancun where the racers plan to participate in late November's World Climate Change Conference. Related content: 80beats: From GM: A 2-Wheeled, Electric, Networked Urban People Mover 80beats: In the Commute of the Future, Drivers Can Let a Pro Take the Wheel 80beats: An Electric-Car Highway in California, But Just for Tesla 80beats: How Would You Like Your Green Car: Hydrogen-Powered, or With a Unicycle on the Side? 80beats: What Does GM’s Bankruptcy Mean for Its Much-Hyped Electric Car?