Are the Desert People Winning?

My desk, like the desk of most research scientists, sees an overwhelming traffic of scholarly journals and articles—reams of pages of the latest cutting-edge discoveries, destined to be outdated before next week. But one study, A Cross-Cultural Summary, written in 1967 by the Stanford anthropologist Robert Textor, has remained firmly planted there for some time now—and not only because, at 3,000 pages long, it’s rather hard to pick up and move. Textor’s massive tome contains a cultural correlation that bears disquietingly on the type of planet we humans have produced for ourselves today, and my mind turns to it more and more of late. 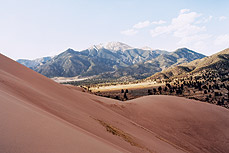 Eleven thousand years ago Clovis nomads may have dwelled in the Great Sand Dunes of Mosca, Colorado, where the desert abruptly ends at an alpine forest. Their culture still rings true in our daily lives as the successful societies on Earth continue to adopt the ways of desert dwellers. Vicky Sambunaris

All across the world, the sort of culture you live in has something to do with the ecosystem around it. Traditional tundra societies are more likely to share cultural patterns with each other than with tropical rain forest societies, regardless of whether some descended from a common ancestral culture. High-altitude plateau cultures differ in systematic ways from fishing cultures in island archipelagoes. Some of these correlations are fairly predictable: Tuareg desert nomads are not likely to have 27 different words for types of snow or fishhooks. But as Textor found, some of the correlations are far from predictable and have helped contribute to the sociopolitical mess we now inhabit.

Attempts to link culture with climate and ecology have an old history (Herodotus did it long before Montesquieu), but with the rise of anthropology as a discipline, the effort became scientific. Early efforts were often howlers of dead-white-male racism; every study seemed to generate irrefutable scientific proof that northern European ecosystems produced superior cultures, more advanced morals, technologies, and intellects, and better schnitzel. Much of contemporary social anthropology represents a traumatized retreat from the sins of those intellectual fathers. One solution was to resolutely avoid cultural comparisons, thereby ushering in an era wherein an anthropologist could spend an entire career documenting the puberty rite of one clan of farmers in northeastern Cameroon.

But some anthropologists remained generalists, studying cross-cultural patterns while cautiously treading around ideological bias, and many continued to explore how ecology affects culture. One such pioneer was John Whiting of Harvard, who in 1964 produced a paper entitled “Effects of Climate on Certain Cultural Practices.” Comparing data from non-Westernized societies from around the planet, he noted that husbands and wives from cultures in the colder parts of this planet are more likely to sleep together at night than are spouses in the tropics. He also found that cultures in habitats that produce protein-poor diets have the longest restrictions on postpartum sex. Whiting hypothesized that to counterbalance the lack of protein, infants required a longer period of nursing, which placed a premium on well-spaced births.

Other anthropologists explored the ecological roots of violence. In 1982 Melvin Ember of Yale found that certain ecosystems are so stable and benign that families remain intact throughout the year, farming their plot of land or hunting and gathering in the surrounding rich forest. In less forgiving settings, family units often split up for long periods, dividing their herds into smaller groups during dry seasons, for instance, with family members scattered with subflocks on distant pockets of grazing land. In such situations, warrior classes—as one sees among the pastoralist cowherding Masai of East Africa—are more common. There are advantages to having a communal standing army in case enemies appear when many of the men are away finding grass for the cattle.

In the 1960s, Textor pursued a radically different approach to cross-cultural research. He collated information on some 400 different cultures from around the world and classified them according to nearly 500 traits. What sort of legal system did each culture have? How did its people make a living? Did they believe in an afterlife? Did they weave or know about metallurgy? When at play, did they prefer games of chance or of strategy? Then he fed all these variables about all these cultures into some gigantic paleo-computer, cross-correlated everything, and laid out the significant findings. The result, his monumental A Cross-Cultural Summary, offers table after table indicating, among other things, which cultural differences are statistically likely to be linked to ecological differences. While not the sort of book you toss in your knapsack for beach reading, there is something irresistible about thousands of pages of correlations. Where else could you discover that societies that don’t work with leather very well are disproportionately likely to have games of skill? How do you explain that one?

From these various anthropological approaches, a basic dichotomy has emerged between two types of societies from very different ecosystems: societies born in rain forests and those that thrive in deserts. Think of Mbuti pygmies versus Middle Eastern bedouin, or Amazonian Indians versus nomads of the Gobi. There turn out to be consistent and permeating differences between the two. Obvious exceptions exist, some quite dramatic. Nonetheless, the correlates are unnerving.

Begin with religious beliefs. A striking proportion of rain forest dwellers are polytheistic, worshipping an array of spirits and gods. Polytheism is prevalent among tribes in the Amazon basin (the Sherenti, Mundurucu, and Tapirape) and in the rain forests of Africa (the Ndorobo), New Guinea (the Keraki and Ulawans), and Southeast Asia (the Iban of Borneo and the Mnong Gar and Lolo of Vietnam). But desert dwellers—the bedouin of Arabia, the Berbers of the western Sahara, the !Kung of the Kalahari Desert, the Nuer and Turkana of the Kenyan/Sudanese desert—are usually monotheistic. Of course, despite allegiances to a single deity, other supernatural beings may be involved, like angels and djinns and Satan. But the hierarchy is notable, with minor deities subservient to the Omnipotent One.

This division makes ecological sense. Deserts teach large, singular lessons, like how tough, spare, and withholding the environment is; the world is reduced to simple, desiccated, furnace-blasted basics. Then picture rain forest people amid an abundance of edible plants and medicinal herbs, able to identify more species of ants on a single tree than one would find in all the British Isles. Letting a thousand deities bloom in this sort of setting must seem natural. Moreover, those rain forest dwellers that are monotheistic are much less likely to believe that their god sticks his or her nose into other people’s business by controlling the weather, prompting illness, or the like. In contrast, the desert seems to breed fatalism, a belief in an interventionist god with its own capricious plans.

Another major difference was brought to light by Melvin Ember. Desert societies, with their far-flung members tending goats and camels, are classic spawning grounds for warrior classes and the accessories of militarism: military trophies as stepping stones to societal status, death in battle as a guarantee of a glorious afterlife, slavery. And these cultures are more likely to be stratified, with centralized authority. A cosmology in which an omnipotent god dominates a host of minor deities finds a natural parallel in a rigid earthly hierarchy.

Textor’s work highlights other differences between desert and rain forest societies. Purchasing or indenturing wives is far less prevalent among rain forest peoples. And in rain forest cultures, related women tend to form the core of a community for a lifetime, rather than being shipped off to serve the expediency of marriage making. In desert cultures, women typically have the difficult tasks of building shelters and wandering in search of water and firewood, while the men contemplate the majesty of their herds and envision their next raid. Among rain forest cultures, it’s the men who are more likely to do the heavy lifting. Rain forest cultures also are less likely to harbor beliefs about the inferiority of women; you won’t be likely to find rain forest men giving thanks in prayer that they were not created female, as is the case in at least one notable desert-derived religion. Finally, desert cultures tend to teach their children to be modest about nudity at an earlier age than in rain forest cultures and have more severe strictures against premarital sex.

Searching for the Ghost Orchids of the Everglades