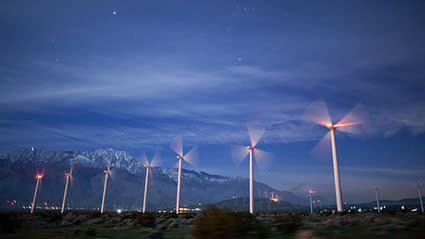 It seems wind turbines aren't just stirring up energy, but a fair bit of emotion, too. And when that emotion comes in the form of gunshots, it makes the news. In early December someone sabotaged poor wind turbine number 8 in a wind farm in Bingham township, Michigan by taking out its transformer. The Huron Daily Tribune reports:

The hole in the wind turbine's transformer caused it to break down, which resulted in the turbine overheating and automatically shutting down. The shooter remains on the lam, and his motives are not clear, says Treehugger

We can't be sure that the shots fired near Ubly, Michigan, were indeed by a wind power opponent, or coal lover. Maybe it was just a bored kid stupidly destroying private property. Actually, the bored kid is a better scenario than another possibility: Someone who doesn't like wind turbines, and the renewable energy they produce.

The incident in Michigan isn't the first of its kind. Problems have also cropped up near Geistown, Pennsylvania in May, including a shooting while two workers were performing maintenance on the turbine--literally putting them in the line of fire. The county is offered a $2,000 reward for information on the shooter, local District Attorney Kelly Callihan told the Tribune Democrat

“We have had multiple incidents around Portage. On May 10, it escalated to a point where lives were endangered,” District Attorney Kelly Callihan said Tuesday during a press conference.... “There were maintenance workers up on the tower.”

The problem isn't restricted to the United States; it seems people are getting gun-shooting angry over wind turbines all over the world. In Romania

, the company building a wind farm had to hire bodyguards to protect it, and they were forced to fire rubber bullets to keep outsiders off the company's land. Related Content: Discoblog: Are Wind Turbines Killing Innocent Goats?

Discoblog: Did an “Alien Octopus” Destroy a British Wind Turbine?

The Intersection: When Wind Turbines Over Rotate