And what's happening in the New Arctic is not staying there 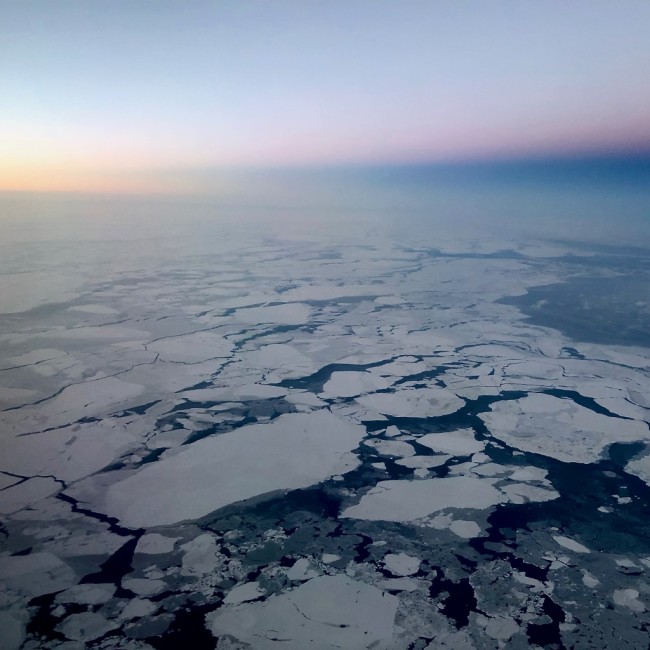 I shot this iPhone photo of Arctic sea ice in the Davis Strait between Greenland and Baffin Island while flying from Iceland to Denver on Jan. 30, 2018. (Photo: ©Tom Yulsman) Another month, yet another record low for Arctic sea ice extent in a warming world. January's average ice extent in the Arctic was 525,000 square miles below the 1981-to-2010 average, making it the lowest January extent in the satellite record. This is an astonishingly large loss of ice — equivalent to 80 percent of Alaska. But what happened in January was equally, if not more significant, for its timing. It happened when the Arctic was gripped by frigid, polar weather. Record lows in the Arctic once occurred mostly in September — at the end of summer when relatively warm temperatures naturally cause the frozen lid of sea ice to shrink to an annual minimum extent. With human-caused warming added on top of relatively mild summer temperatures, record melt-backs in summer perhaps are not so surprising. But now, dramatic reductions in sea ice are occurring more and more often during the cold season. "Now we are seeing winter really get into the act as well," says NSIDC director Mark Serreze. "The shrinking Arctic sea ice cover is no longer something that just stands out in summer." This shift to record lows in winter, scientists say, is yet another indication that human activities have already transformed the region into what they're calling "the new Arctic." https://twitter.com/ZLabe/status/959517583706763264 Why should those of us who don't live in the Arctic care about what's happening up there? Péter Szijjártó, Minister of Foreign Affairs and Trade for Hungary — obviously not an Arctic nation — answered that question in this way, during an address to the Arctic Frontiers conference in Norway last month: "Whatever happens here in the Arctic has a direct and immediate impact on the rest of the world, and especially Europe." I don't know about "immediate," but there are myriad ways that changes in the Arctic are affecting the rest of the world — for example, changes to fisheries as fish stocks move north, and possible (but still unproven) effects on weather far to the south. Shriveling sea ice also has turned the region into something of a new frontier. Many nations are eyeing the Arctic's opening sea routes, its strategic position between Eurasia and North America, and its potentially huge reserves of oil and gas, as well as other resources. This, in turn, is having geopolitical consequences. Among them: Russian military moves that some analysts believe are designed to bring down an "ice curtain" in the region — intended to deny other nations access to large swaths of the Arctic. As sea ice growth last month was lagging far behind normal and heading for its record low, politicians and scientists attending the Arctic Frontiers conference were discussing the ramifications of the new Arctic. Among the scientists was Ingrid H. Onarheim, a researcher at the University of Bergen and Bjerknes Centre for Climate Research. She began an overview talk about Arctic sea ice by putting the trend into a long-term context: "The recent sea ice loss is unprecedented," she said, at least during the last 160 or so years. Modern satellite monitoring of sea ice could not by itself reveal that insight, because it dates back only to 1979. So for a longer term perspective, researchers from NSIDC and elsewhere turned to novel data sources. These included whaling ship logs, sea ice charts from the Danish Meteorological Institute, compilations by U.S. Navy oceanographers, observations from aircraft, and other sources. All of this disparate information had to be digitized and then synthesized to be compatible with one another. The resulting database, going all the way back to 1850, shows that at least since then "we’ve never had as little ice as we have now," Onarheim told her colleagues at Arctic Frontiers. Here's what that looks like in graphic form:

Source: "A database for depicting Arctic sea ice variations back to 1850," John E. Walsh et al, Geographical Review, 11 July 2016 Before getting into what these maps show, I should point out that there is a typo in the one on the left. It should be 1850-1900. With that correction in mind, let's turn to the details. The left-hand map above shows the concentration of sea ice during September of 1854. The new database shows that this month had the smallest ice extent during the entire 1850-1900 period. The other maps in the triptych show what sea ice looked like for the lowest September in each of those respective periods. The take-away message from the triptych is pretty clear. As the authors of the paper describing the new long-term database wrote:

It is apparent that the recent September minimum of 2012 is far less than the minima of the two earlier . . . periods. This comparison indicates that the summer ice minima of the past decade have no precedents in earlier decades back to 1850.

But as last month's record low ice extent shows, significant sea ice losses are no longer mostly confined to the warmer months. I think you can see that pretty well in this graphic showing how Arctic sea ice fared during each of the 1,956 months between 1850 and 2013:

The status of Arctic sea ice month-by-month (vertical axis) and year-by-year (horizontal axis). Blues indicate ice extent that's below the long-term mean. Reds indicate the opposite. (Source: Cooperative Institute for Research in Environmental Sciences, after a figure by Julienne Stroeve, National Snow and Ice Data Center) The first thing that jumps out at me is the dominance of blue, meaning lower than average sea ice, starting around 1975. It's most pronounced during July, August and September, the warm months. But recently, deeper blues have been spreading out into the cold season months of November through April. "We are losing sea ice in all seasons now,” Onarheim said, echoing the NSIDC's Mark Serreze. "The changes in ice are spreading from the summer to winter season." There is no doubt as to what's behind the accelerating decline of the sea ice at the top of the world: warming from humankind's emissions of carbon dioxide and other greenhouse gases. There is also no doubt that the Arctic is actually ground zero for climate change — it's warming twice as fast as the globe as a whole. But the Arctic is a very big place, and the regional patterns are just as important as the overall trend. No region has been affected more than the Barents Sea, located north of Norway and Russia, and the nearby waters just north of the archipelago of Svalbard. And as it turns out, the strongest effect in this part of the Arctic has been — you guessed it — during winter, according to Onarheim. Scientists are working hard to explain why this is so, and research suggests that the answer can be summed up this way: In this region, the Arctic is experiencing what some call "Atlantification." 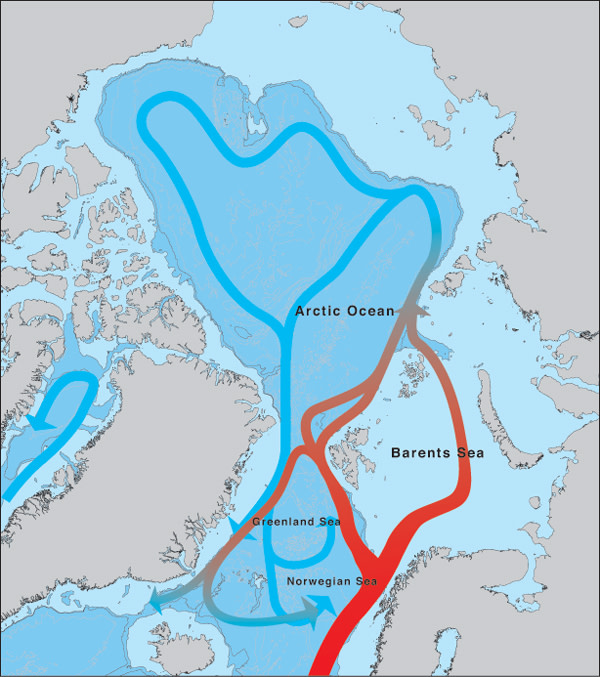 The Gulf Stream, carrying warm Atlantic water, moves north along the Norwegian coast and divides into two main branches, one on either side side of the island archipelago of Svalbard. In the Arctic Ocean, this Atlantic water becomes denser as it cools and therefore sinks. After circulating, the now cold water leaves the Arctic Ocean, mainly through the Fram Strait between Svalbard and Greenland. (Illustration: Audun Igesund, Norwegian Polar Institute). Scientists have known for 100 years that warm Atlantic water rides north on the back of the Gulf Stream, and that extensions of that massive current take it all the way up into the Barents Sea and over the top of Svalbard. (See the map above.) Research has shown that increasingly warm Atlantic Ocean water carried on these currents — about 1 degree C warming since 1979 — is inhibiting sea ice from forming, even as winter air temperatures continue to plunge well below freezing. Research by Onarheim and her colleagues shows that warming Atlantic waters arriving north of Svalbard on the currents are having several specific impacts. To start with, they push under the sea ice that does form, inhibiting further growth and even causing it to melt from underneath. This leaves the ice thinner and less extensive than it otherwise would be. With less floating ice forming a cap on the sea during winter, the relatively warm sea water is able to give up more heat to the atmosphere. And that helps explain a nearly 7 degree C increase in mean air temperature north of Svalbard in winter, according to Onarheim's research. As air temperatures naturally warm in the spring, the thinner ice can melt out faster. That leaves the water exposed to sunlight for longer periods. So it absorbs more energy and heats up — inhibiting the formation of ice when cold air temperatures return with a vengeance in the fall. And that means still less sea ice in the winter months. 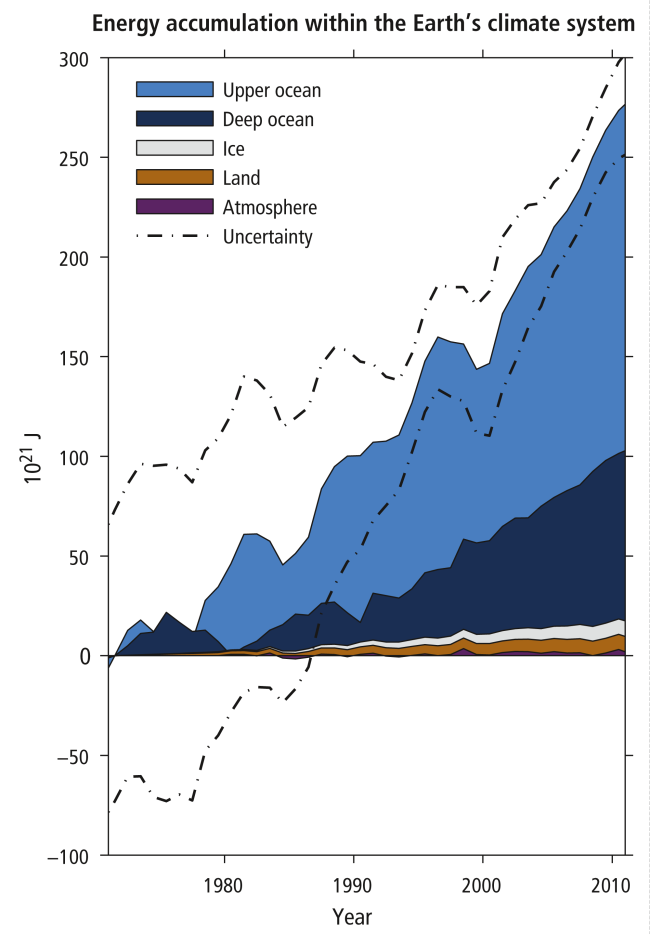 Here is how energy has been accumulating within Earth's climate system, thanks to humankind's emissions of greenhouse gases. As the graph shows, most of the energy has been been absorbed by the oceans. The rest has gone to melting ice, warming continental land masses and the atmosphere. (Source: Intergovernmental Panel on Climate Change Fifth Assessment Report) The oceans make up 70 percent of our planet's surface. And water is particularly adept at soaking up heat. So much so, in fact, that Earth's oceans have absorbed more than 90 percent of the heat that has accumulated in the planet's climate system due to our emissions of greenhouse gases. As we've now seen, some of that heat has a tendency to come out — nowhere more readily than in the Arctic, where the frigid atmosphere is practically begging to absorb heat, and where the Gulf Stream's northernmost extensions have been only too happy to oblige. Onarheim's overarching take-away message during her Arctic Frontiers talk was this: Computer modeling of the climate system suggests that unless we significantly rein in CO2 emissions soon, Arctic waters could be sea-ice free during summer by about mid-century. Sea ice would still form in winter. But the models also predict that continuing warming would lead to ice-free Arctic waters in winter between 2061 and 2088. (The rather large range represents the possible impact of natural climate processes.) In other words, the models are saying that in just a little more than forty years, Arctic waters could be ice free year 'round. That would give us a radically new Arctic — and a very different planet than the one we live on today. One last thing: So far, Arctic sea ice has been disappearing more quickly than the models have predicted. So we may not have to wait four decades for completely ice-free Arctic waters. "If we want to keep the ice cover, we have to reduce the CO2 emissions,” Onarheim says. "The faster we emit the CO2, the faster we will lose the sea ice.”