Arctic Sea Ice Heading for One of Lowest Extents on Record 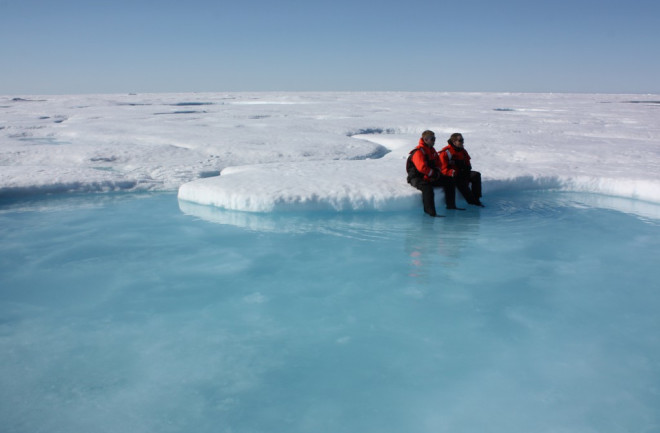 Crew members of the U.S. Coast Guard Cutter Healy on Arctic sea ice during NASA's ICESCAPE mission in 2011. (Source: NASA/Kathryn Hansen) When I heard the news from the National Snow and Ice Data Center that Arctic sea ice will likely reach its third or fourth lowest minimum extent on record in coming weeks, I started looking for a compelling image to illustrate what's happening — one a bit more interesting than a map or graph. The photograph above is what I've come up with. These two crew members from the U.S. Coast Guard Cutter Healy are taking a break from their work on NASA's ICESCAPE mission in 2011. They're dangling their feet in a melt pond atop Arctic sea ice. I find the photo symbolic of humanity's relationship with the Arctic. Right now, we're dipping our feet into a region that is warming faster than any other on Earth, causing sea ice to shrink in extent and beckoning us to move even farther into this new "frontier," as some call it, to exploit its resources and potential sea routes. This was a theme of President Obama's highly publicized trip to the Arctic in Alaska this week. His visit highlighted what I've called the polar paradox: As the Arctic warms due to human activities, new opportunities for oil and gas drilling are opening up, which if successful will only enhance warming. Obama's visit highlighted the paradox: He decried global warming even as he has approved exploratory drilling in the Arctic and called for steps to enhance our country's ability to operate in the still-forbidding region. (For more on that, check out this overview of the issue in Vox.) Obama argues, persuasively I think, that we will continue to need oil and gas while we are making a transition to a low-carbon future — and better it should come from domestic sources than abroad.

A low-pressure weather system swirls in the Arctic Ocean next to a large swath of fractured sea ice. From left to right, the image, acquired by NASA's Terra satellite on Sept. 3, 2015, covers about 45o miles. (Source: NASA Worldview) Meanwhile, Arctic sea ice continues to decline in geographic extent. It hasn't been a steady drop; there have been some ups and downs. But between 1979 and 2015, the extent of Arctic sea ice in August has declined at a rate of about 10.3 percent per decade.

Source: NSIDC Click on the thumbnail at right to see the August trend in Arctic sea ice extent. Arctic sea ice extent averaged for August 2015 was the fourth lowest in the satellite data record, according to the National Snow and Ice Data Center's report this week. And there are still a few weeks left in the melt season. Scientist now have a fairly good idea of how things will wind up when the melt season ends and the minimum extent is reached. From the NSIDC:

Forecasts show that this year’s minimum sea ice extent, which typically occurs in mid to late September, is likely to be the third or fourth lowest in the satellite record. All four of the lowest extents have occurred since 2007.

Next week I am headed to the Arctic archipelago Svalbard about half way between the northern coast of Norway and the North Pole. I'll be blogging from there as well as helping to teach a field module of a journalism course focusing on climate change. The minimum sea ice extent will likely be reached while I'm there. But whether it does or not, I'll have some stories and insights to share from a part of the world that is experiencing rapid and dramatic climate change. Stay tuned.