Meanwhile, the Antarctic has experienced a sudden spike of warming that scientists say was previously unimaginable in intensity. 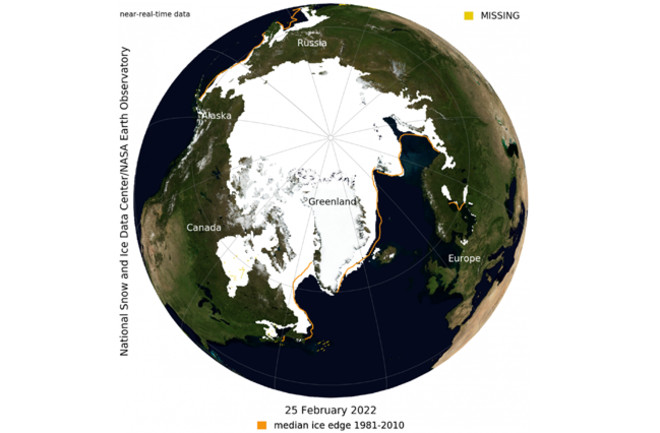 The extent of Arctic sea ice as of February 25, 2022, when it reached its maximum extent for the year. (Credit: NSIDC/NASA Earth Observatory)

After growing through the cold months of fall and winter, the Arctic's vast lid of floating sea ice is now entering the warm season — in poor health.

The sea ice appears to have reached its annual maximum extent on Feb. 25, 2022, with the ice covering 5.75 million square miles. That's the tenth lowest extent in the 44-year satellite record, according to the National Snow and Ice Data Center.

If tenth lowest doesn't seem very significant, consider that this year's maximum extent was 297,000 square miles below the long-term average — an area larger than the state of Texas.

The winter sea ice maximum also occurred 15 days earlier than average. Only two other years since the start of the satellite record had an earlier maximum and ensuing start to the warm season retreat of ice: 1987 and 1996.

Still another vital sign suggests Arctic sea ice is heading toward summer in poor health: A new study shows the Arctic has lost about one-third of its winter sea ice volume over the past 18 years — more than previously believed. This has happened largely because less and less sea ice is persisting over several years.

The decline in this so-called multiyear ice has been particularly significant over the past few years. According to the new research, it was 1.5 feet thinner at the end of the winter growth season last year than at the end of the 2018/2019 season — a 16 percent decline.

“We weren’t really expecting to see this decline, for the ice to be this much thinner in just three short years,” says lead study author Sahra Kacimi, a polar scientist at the Jet Propulsion Laboratory, quoted in a release.

The upshot: Weak, seasonal ice, which melts out every summer, is replacing the multiyear ice — the thickest and sturdiest in the Arctic. It's a self-reinforcing trend, since less ice means less sunlight reflected back into space, resulting in more warming of the Arctic, and still less ice.

This is significant because what happens in the Arctic doesn't stay in the Arctic. The thinning ice cover is eroding the Arctic's ability to help help keep the Northern Hemisphere cool. It's also contributing to disturbances in global weather patterns.

On the very day that the sea ice reached its maximum extent up north in the Arctic, an unsettling record was set down in Antarctica. On Feb. 25, Antarctic sea ice reached its late-summer minimum, dropping below all previous minimum ice extents there in the satellite record, according to the NSIDC.

The annual Antarctic minimum extent of sea ice between 1979 and 2022 is shown here in black, and the trend line is in blue. On Feb. 25, 2022, it plunged to a record low. (Credit: National Snow and Ice Data Center)

Season-to-season and year-to-year, swings in the extent of Antarctic sea ice are much greater than in the Arctic. The graph above shows this variability clearly, along with something else: There's not much of a long-term trend, as shown by the blue, horizontal line.

Does this year's dramatic drop mark a shift toward declining Antarctic sea ice over the long run? Scientists can't say just yet.

There's also uncertainty about an even more dramatic event — one previously unimaginable to scientists — that occurred in the Antarctic just weeks after the sea ice there reached a record low. On March 18th, at the start of winter in Antarctica, the temperature at a remote research station in a place called Dome C soared to nearly 70 degrees F above normal for this time of year.

The heatwave responsible for this dramatic spike occurred over a huge portion of the continent. And it was of "absolutely unprecedented magnitude," according to Robert Rohde, lead scientist at Berkeley Earth.

As Jonathan Wille, a post-doc researcher at the Université Grenoble Alpes who studies polar meteorology, put it in a Tweet, "This Antarctic heat wave definitely changes what we thought was possible for Antarctic weather."

It was triggered, according to Wille, by a particularly intense atmospheric river. This long, narrow, fast-flowing feature carried a huge amount of water vapor and warmth to East Antarctica. (For more on the impact of atmospheric rivers on Antarctica, see this previous story: "Gigantic Expanse of Sea Ice Breaks Free From Antarctica and Disintegrates")

Was this a one-off, freak event, or is climate change raising the odds for atmospheric rivers becoming increasingly intense? Although a definitive answer isn't known, Wille suspects climate change is implicated. "It would be very difficult to say that there’s not a climate change fingerprint on an event like this," he says, quoted in the Washington Post.