Arctic Bulls Forced to Cool Their Heels Even as Arctic Warms 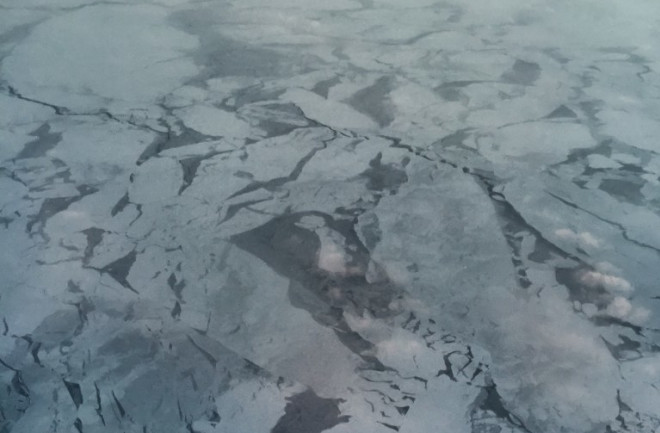 Sea ice in the Davis Strait between Greenland and Canada, as seen from an aircraft on January 23, 2015. (Photo: © Tom Yulsman) It seems that at least for now, the bloom is off the Arctic rose. As an article in this week's Economist argues, fervent hopes for developing the Arctic's energy and minerals, and for using an Arctic sea route to ship goods between Asia and Europe more quickly, have faded. Blame plunging petroleum prices that have made exploring for Arctic oil uneconomic — but not just that. Despite global warming, which has caused the Arctic to warm faster than any other region, it is still an inhospitable place. And no amount of bullishness for development of resources there will make the natural up and down swings of weather and climate go away — swings that complicate the best laid plans of the Arctic bulls. That said, the opportunities haven't necessarily gone away either. But as is often the case, nature has turned out to be less cooperative than some would have liked. At the center of it all is a paradox, one I've written about quite a lot here at ImaGeo — the polar paradox: As our emissions of greenhouse gases have warmed the Arctic, sea ice has shrunk and parts of the region have looked more hospitable to development — most especially development of oil and natural gas. But burning Arctic fossil fuel reserves will only enhance the warming in the region, and globally as well. To countries like Norway and Russia, which depend heavily on revenues from fossil fuel development, this polar paradox has seemed like a golden opportunity.

Norwegian Minister of Foreign Affairs, Børge Brende. (Photo: ©Tom Yulsman) Already, the Norwegian Arctic has been experiencing higher economic growth than other areas of the country. And the government has understandably placed a high priority on keeping that going. “Our aim is to make northern Norway one of the most innovative regions in the world, a kind of mini-silicon valley with growth and prosperity based on science and knowledge," Norway's Minister of Foreign Affairs, Børge Brende, told people gathered at the Arctic Frontiers conference in Tromsø on January 19th. Where is the revenue for that growth and prosperity supposed to come from? In large measure, from oil and gas. The Arctic, it turns out, harbors nearly a quarter of all undiscovered reserves of oil and gas in the world, according to the U.S. Geological Survey. And it should come as no surprise that Norway would like to develop its own portion of those reserves. Speaking at the Arctic Frontiers conference, Tim Dodson, Executive Vice President of Statoil, a leading oil and gas company whose largest shareholder is the Norwegian government, was bullish on Arctic fossil fuel development. "Only one fifth of the oil used globally last year was replaced by new discoveries," he noted. "With that backdrop we believe the Arctic will play a major role in the energy mix." Meanwhile, the Russians have been busily militarizing their portion of the Arctic in anticipation of more and more economic activity there, including the possibility of cargo ships plying the Northern Sea Route between Europe and Asia in the waters north of Russia. This routing trims weeks off the traditional path through the Suez Canal.

Artur Chilingararov. (Source: Arctic Frontiers) Might this help to bring about a return of the Cold War? At the Arctic Frontiers conference, Arthur Chilingarov, a Russian polar explorer and board member of the Russian oil company Rosneft, shrugged this off with what seemed like a joke — sort of: "We are not afraid of the cold," he said. "We work and prosper in the cold." I found Chilingarov's words more than a tad chilling, especially since he is not exactly some low-level functionary in the Russian bureaucracy. He may be best known for planting the Russian flag on the seafloor under the North Pole from a mini-submarine in 2007. He also holds the title of "Hero of the Soviet Union." And he has served as a special envoy for Russian President Vladimir Putin on Arctic issues. The enthusiasm for Arctic development still coming from Russia is understandable. Nearly 70 percent of Russia's export revenues in 2013 came from oil and gas. And oil and gas revenues account for more than half of the federal government's budget. As for Norway, one of its two sovereign wealth funds is valued at $893 billion — that's $176,000 for each and every one of the 5.84 million Norwegians. And the money comes directly from development of oil and gas. But the Arctic doesn't look like quite as beguiling to people farther afield. As Zha Daojiong, a Professor in the School of International Studies at Peking University, put in his talk at the conference:

Some refer to the Arctic as the new Middle East, referring to the geologic availability of oil, natural gas, minerals and fisheries. I find those kind of parallels … kind of far fetched."

For sure, the drop in petroleum prices makes drilling in the Arctic less attractive. As The Economist puts it:

. . . since mid-2014, falling oil prices and conflicts between Russia and NATO have lessened the Arctic’s allure. Its energy is pricey. Even at $100 a barrel, many fields were marginal because the environment is so extreme . . . With oil at $50 a barrel, few Arctic fields would be economic. One of Norway’s largest private investors, Jens Ulltveit-Moe, recently called energy exploration in the Arctic “a licence to lose money”.

Just as important, the Arctic is not following the script written by its boosters. Yes, the region is warming, and, over the long run, floating sea ice has been shrinking in summer, raising the prospect that a major impediment to drilling and to shipping would eventually weaken substantially. But over the past few years, the shrinkage in the extent of sea ice has actually slowed. A new study published just last week in Nature Climate Change finds that we should expect natural variability in the climate system to produce fairly long stretches when Arctic sea ice will stop shrinking like this, even as the planet continues to warm in the background.

In the graph above, the red line shows how the extent of Arctic sea ice in September has compared to the 1980–2000 average. The overall trend is down. The green line shows the linear trend between 2001 and 2007, and it indicates a very sharp drop in extent during that period. But the blue line shows a leveling off between 2007 and 2013. The black line shows the mean from an ensemble of models. (Source: "Influence of internal variability on Arctic sea-ice trends," Neil C. Swart et al, Nature Climate Change 5, 86–89, 2015) The study found that while Arctic sea ice is likely to decline over a timescale measured in decades, there is still a one-in-three chance that any period like 2007 through 2013 will see no sea ice loss. "Thus, pauses in sea-ice loss, such as seen over the past eight years, are not surprising and are fully expected to occur from time to time," the authors conclude in their paper. The vicissitudes of Arctic sea ice, as well as harsh weather, high insurance rates, the cost of ice breakers, and other factors, are helping to push dreams of opening a Northern Sea Route between Europe and Asia further into the future. For Singapore and Asia in particular, "the Northern Sea Route is suboptimal,” says Ian Storey, Senior Fellow at the Institute of Southeast Asian Studies in Singapore. Speaking to the Arctic Frontiers conference, he pointed out that just 53 ships plied the route in 2014, a 25 percent overall reduction in traffic over 2013. "These figures show that the Northern Sea Route is unreliable in the short term, and yearly variations are likely," he says. "The long term picture is unknown." Well, not quite. In the long run, the science indicates that sea ice will retreat. But how much and by when depends on what we do about our emissions of carbon dioxide and other greenhouse gases. Assuming emissions will continue to rise until about mid-century, at which point a transition to low- and no-carbon energy sources begins to bring them down (the so-called "RCP4.5" scenario), even in 2070 the Arctic will still present many challenges.

A note to readers of ImaGeo: For several years, the Norwegian government has covered journalists’ travel expenses to attend the Arctic Frontiers conference. I received my first invitation to participate in 2012. As I pointed out in a story shortly after I launched this blog, I was torn. Journalists are supposed to maintain independence from sources.

On the other hand, journalistic organizations have cut back so much that there is very little money available to pay for reporters to cover issues like the polar paradox. Discover Magazine certainly would not be able to send me to cover to the conference.So I and other journalists have been faced with an ethical dilemma: Decline the invitation to have travel expenses paid, in which case the kinds of issues I've described in this commentary would receive less attention than they deserved.Or we could accept the invitation, be transparent about it, and do our best to air out the serious issues surrounding the polar paradox honestly and fairly — but leave ourselves open to criticism that we had lost our independence.As I wrote when I first confronted this dilemma:

Welcome to another paradox of the emerging Anthropocene epoch: The folks who are eager to develop their Arctic oil reserves — which will add to global warming — were more than willing to help us cover the issue with travel support. There were no strings attached. (Other than my own loss of sleep while wrestling with the issue.)

In the end, I chose to accept the support and cover the issues. I hope what follows will speak for itself.

I made the same judgment this year, and as in the past, there have been no strings attached. If you have an opinion about that decision, please feel free to share it below.