Arctic Blast Explodes Across the High Plains, Kicking Up a Large Dust Storm Visible From Space 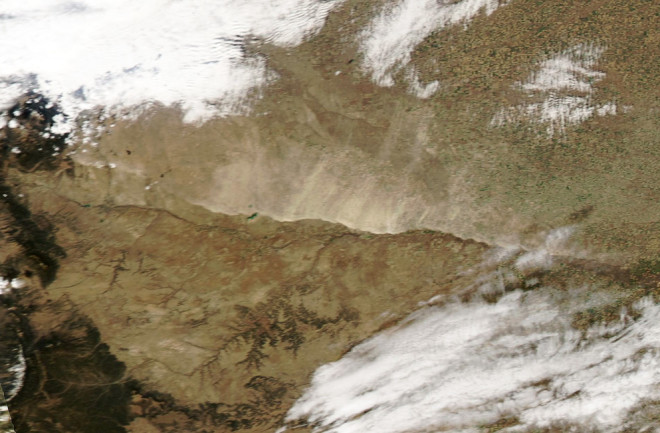 NASA's Aqua satellite captured this image of dust blowing across the plains of Colorado east of Pueblo as a gust front advanced from north to south on Monday, Nov. 10, 2014. (Source: NASA) As Arctic air rushed south across a large portion of the U.S. midsection yesterday, high winds at the leading edge of the cold front lofted palls of dust into the air over the high plains — so much so that they were visible to satellites orbiting high overhead. You can see the dust in the image above, acquired by NASA's Aqua satellite on Monday afternoon as the leading edge of the cold air advanced across Colorado. The line of dust is located along the Arkansas River, a little east of the city of Pueblo. The dusty leading edge of the Arctic blast was also visible to the GOES-East weather satellite:

An animation of images captured by the GOES-East satellite on Monday, Nov. 10, 2014. (Source: NOAA) I've marked the starting frame of the animation with red arrows to highlight the leading edge of the cold air. As that Arctic blast advances across southeastern Colorado and into New Mexico, Oklahoma and the Texas panhandle, it trails a dusty pall behind it. A little later, the blast reached Amarillo, where weather radar picked up the signature of the dust it was kicking up:

Front is through Amarillo with 50+ mph winds on their north side with blowing dust. ETA for Lubbock ~930 PM #lubwxpic.twitter.com/5l7z1KYBU6 — NWS Lubbock (@NWSLubbock) November 11, 2014

The frigid air now blanketing a large swath of the United States comes straight from the Arctic, thanks to a portion of the polar vortex that has spilled south. For an explanation of what's going on, see my earlier posts here and here. I'll be looking for more interesting imagery of this dramatic weather event. If I find something compelling, I'll share it here. So stay tuned.