Aral Sea Shows Signs of Recovery, While the Dead Sea Needs a Lifeline 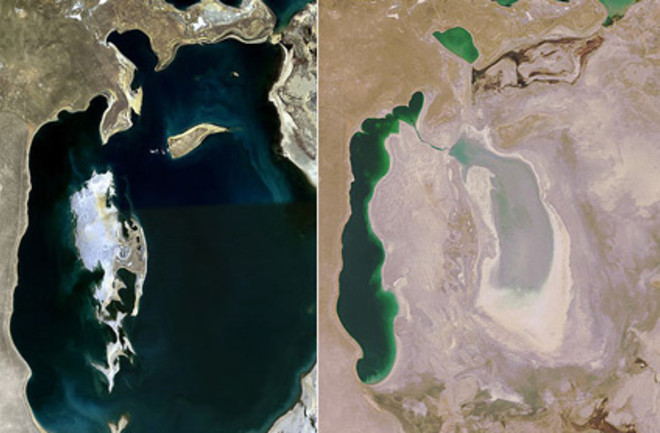 There are few more dramatic examples of humanity's careless treatment of the earth than the Aral Sea. The Aral's precipitous decline began in the 1960s, when the Soviet Union began using river water to irrigate the mega-farms it established on the arid steppe. As the river water flowing into the sea slowed to a trickle, the Aral began drying up.

Once a colossal geographic feature—at 26,000 square miles (67,300 square kilometers), it was the fourth largest inland water body on earth in terms of surface area—the Aral shrank to hold just one-tenth of its original volume, becoming a tragic shadow of itself [National Geographic].

Fisheries collapsed, people moved away, towns were abandoned, and the Aral became famous primarily for its ghostly landscapes, with rusting ships lying on sand dunes. But now scientists report that the northern sector of the Aral is making a recovery, due to a concerted effort from the Kazakh government, the World Bank, and scientists. A dam completed in 2005 raised water levels and decreased salinity, and increased the North Aral's span by 20 percent.

Soon native plants, stifled for years by the saltwater, began to sprout, and migrating birds like pelicans, flamingos, and ducks again began to visit the Aral. Nowadays, “It’s a paradise for birds,” says Russian Academy of Sciences zoologist Nick Aladin, who has been studying the Aral since the 1970s. “It’s a place for pleasure, and it’s an enormous victory” [National Geographic].

Freshwater fish have also returned, leading to hopes of a resuscitated fishing industry. And while the South Aral remains in dire straits, researchers say the tentative revival of the North Aral gives them hope. Another sea, another headache. Over in the Middle East, several countries are weighing a proposal that could give new life to the dwindling Dead Sea--but that may cause environmental problems of its own. In the past century, the Dead Sea's surface area has shrunk by almost a third. The Jordan River, which once fed the super-salty lake, has been tapped for irrigating and drinking water by Israel, Syria, and Jordan; shore-side factories that evaporate the water to extract minerals have exacerbated the problem.

Without action, the Dead Sea will continue to shrink. But a proposal being evaluated by the World Bank could revive the lake with a 180-kilometre-long conduit carrying water from the Red Sea 400 metres downhill to the Dead Sea through a canal, pipeline or some combination of the two. The water's flow would generate electricity to run a desalination plant, providing drinking water for local people [Nature News].

But environmentalists are questioning the wisdom of a so-called Red-Dead connector. Drawing vast quantities of water from the Red Sea could damage the fish and coral there, according to Friends of the Earth Middle East. Green advocates also worry that the Red Sea water will change the chemistry of the salty Dead Sea, making life harder for the sea's salt-tolerant microorganisms and encouraging blooms of algae that thrive in less salty water. They argue that intensive water conservation programs could improve the flow of the Jordan River and render the expensive Red-Dead canal unnecessary. Israeli geologist Ittai Gavrieli, who is studying the impacts of the proposed conduit, says the region has a tough decision to make.

If nothing is done, the situation will only get worse, but a Red–Dead conduit would carry with it some real risks. The decision to stop the sea's decline, says Gavrieli, "is a matter of choosing between bad and worse. But the question is, what is bad and what is worse?" [Nature News]