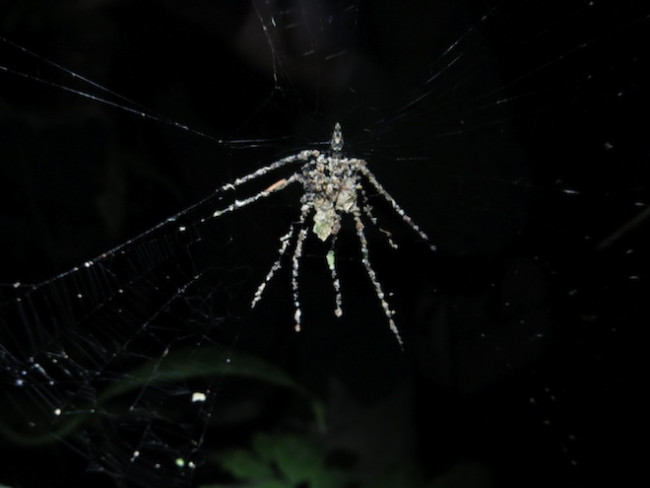 This is not a spider. Nor is it a spit wad target or a child's miscalculated attempt at a paper mâché skeleton. This spider-shaped mass is actually a clever decoy. The inch-long assemblage of leaves, twigs, and dead bugs was meticulously arranged by a spider less than a quarter its size. The arachnid artist created this body double on his web in the Peruvian Amazon, and lurks on the strands above it, pulling strings to make the puppet move. Biologist Phil Torres recently discovered the spider and suggests in a blog entry that its behavior is an elaborate defense mechanism that encourages predators to attack the bigger, flashier spider rather than its sneaky creator. Such strategic distractions are characteristic of spiders in the genus Cyclosa, butother species build blob-shaped constructions which lack legs altogether. And the decoys certainly don't move. Scientists are thus suggesting that this spider is a new Cyclosa species. Definitive identification studies are on hold until January when researchers can get a permit to actually collect the spiders and take a closer look. Image courtesy of Phil Torres.