In the May 2003 issue of Discover, an article titled “Anything Into Oil” drew a phenomenal reader response. The process described—transforming turkey guts, old tires, used plastic bottles, and municipal sewage into fuel oil—struck some readers as more like alchemy than chemistry and struck others as the answer to energy shortages, not to mention the solution to some of America’s worst waste problems. Readers have been asking for an update on how the idea is progressing because our article left the story before the first full-scale industrial plant had been opened. We’ve been waiting for that plant to start up before writing an update, but because it has been delayed, we asked the author of the original article to give us a midterm report. After the plant is up and running long enough to be reviewed, we’ll publish a further evaluation.

(See further follow-ups on Anything Into Oil here and here.)

“This is the great hope—to be the biorefinery of the future,” says Jefferson Tester, a chemical engineering professor at MIT. “Taking in biomass of all sorts and putting out a whole range of valuable products is obviously exciting.”

But the folks at Changing World Technologies, the company behind the process of changing waste into oil, must first prove they can successfully scale up from a 7-ton-per-day pilot plant in Philadelphia to a 200-ton-per-day industrial plant in Carthage, Missouri. 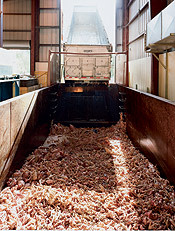 Twenty tons of slaughterhouse turkey parts, freshly dumped by a truck, await processing into oil, gas, and minerals at the thermal conversion process plant in Carthage, Missouri. When the plant reaches full capacity in the fall, it will process 10 dump trucks of leftovers, one tanker truck of blood, and one tanker truck of discarded restaurant grease every 24 hours. | NULL

Early in 2003, company officials predicted that the Carthage plant, which will process guts, feathers, bones, and blood from a nearby ConAgra Foods Butterball Turkey slaughterhouse, would be cranking at full capacity that summer, making 500 barrels of high-quality fuel oil daily. Brian Appel, Changing World Technologies’ chairman and CEO, says several unique challenges have delayed the full-scale operation of the $20 million Carthage facility. The principal setback, he says, was faulty workmanship in the construction of the processing equipment, requiring X-rays of 5,000 welds and the repair of more than 1,000 of those checked. “That alone pushed us back six to nine months. We are currently involved in a legal action against that contractor,” Appel says. Other shakedown adjustments included calibrating the first-stage grinder, adding a biofilter to control odors, tweaking computerized flow controls, and building additional equipment between the first and second stages.

Independent scientists familiar with the process are not surprised by the delays. “This is like any new start-up. It’s nothing unexpected,” says Tester. “They are attempting an extremely ambitious increase in size. It contains some natural risks, but the chemistry is pretty straightforward.” Joseph Michels, director for research initiatives at Princeton University’s Institute for the Science and Technology of Materials, agrees. “Given that these guys have less than a decade invested in this, they have made tremendous progress,” he says. “I remain bullish.”

The latest target date for opening the Carthage plant is now this fall. Engineers have already run the plant at capacity for as much as 12 hours at a time, and preliminary tests show the equipment works efficiently. Out of 100 Btus in a given unit of feedstock, only 15 Btus are used to power the process, with the remainder residing in oil, gas, and chemicals. Most important, the oil produced in these tests easily meets the specifications for diesel fuel. “The main process chemistry does exactly what we thought it would do,” says Appel.

Officials of ConAgra Foods, who formed a joint venture with Changing World Technologies called Renewable Energy Solutions to operate the Carthage plant, remain as upbeat as Appel. “We now know that the technology is sound and the science really works,” says Michael Walter, ConAgra Foods’ senior vice president for commodity procurement. “The front end of the plant is producing organic liquors and free fatty acids, and the back end does make a diesel fuel product.” He adds that Renewable Energy Solutions has spent “a fair amount of money” on pre-engineering a second plant, which will probably be located near Longmont, Colorado, and process both turkey and cattle slaughterhouse waste.

One major development since the original Discover article is the discovery last December of a case of bovine spongiform encephalopathy, or mad cow disease, in Washington State. Since then, interest in using thermal conversion to control the disease has skyrocketed, say company officials. Although no testing has been done on the effect of the thermal conversion process on prions, the rogue proteins that are thought to cause BSE, Tester is confident that the high pressures and temperatures it uses would be more than sufficient to dismantle those pathogens. “Large molecules like that really don’t like that kind of environment,” he says.

Appel says the Colorado plant will be designed to digest whole, diseased cattle along with slaughterhouse waste. “Americans are finally realizing what the Europeans and others have figured out—there are high risks associated with intense farming practices” that involve feeding rendered animals back to animals. “We will divert proteins away from the food chain. You’ll see less disease and less bioaccumulation of toxins when animals once again start eating grass and grain, the way they were meant to eat.”