Antarctica Under Siege by Hidden Forces 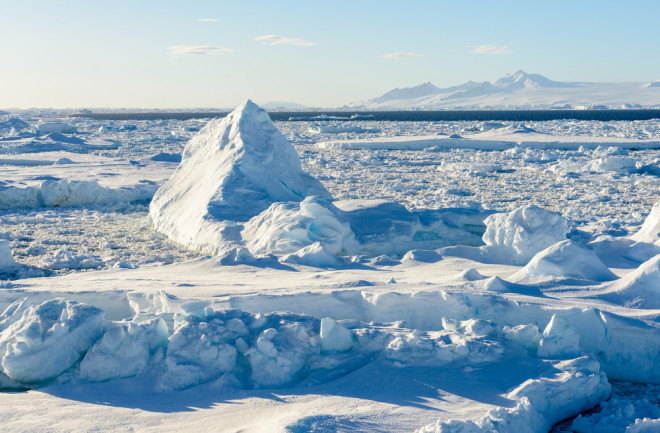 Antarctica is losing more ice than ever, scientists reported in 2015. Its ice shelves — the thick, floating slabs that encircle the continent — are taking the biggest hit. The shelves slow and stabilize the glaciers behind them, but they are succumbing to a hidden force: Deep, warming ocean currents are melting the ice from beneath.

The collapse of several small ice shelves has caused glaciers to accelerate two- to ninefold and spill more ice into the ocean, raising the sea level. A study published in April shows that more ice shelves are coming into play: From 1994 to 2012, the rate of ice shelf shrinkage increased twelvefold. Parts of the ice sheet considered at risk hold enough ice to raise the global sea level by 22 feet. Here’s how our understanding of Antarctica’s vulnerability advanced in 2015.

Climatologists speculated in the 1990s that Antarctica might actually slow the rate of global sea level rise. They expected that rising temperatures would produce more water vapor, leading to more snowfall and more ice. Researchers reported in March that over the past 20,000 years, warmer temperatures have indeed correlated with higher snowfall: For each Fahrenheit degree of warming, snowfall increased by about 2.7 percent. But that hasn’t translated into a reversal of Antarctica’s ice loss.

Glaciologists reported in June that the last remnant of the Larsen B Ice Shelf is splintering, and glaciers flowing into it are accelerating. Its approaching demise continues a disturbing trend: the progressive collapse of five ice shelves since 1989.

Next Up: Larsen C

While the glaciers in this region seemed stable, it turns out warming ocean currents have been melting the underside of the ice. Results published in May show this region crossed an invisible threshold in 2009, with a dozen major glaciers simultaneously starting to thin, sweating off 60 billion tons of ice per year.

The Amundsen Sea coast is the vulnerable underbelly of West Antarctica. Its glaciers slide on beds that lie nearly a mile below sea level, exposing them to ocean currents. New data show ice shelves are collectively losing 100 billion tons of ice per year, and glaciers have accelerated by up to 70 percent.

Hidden Hazards in the East

East Antarctica, situated on high ground that protects it from warming ocean currents, was considered stable. But not exactly, according to surveys with ice-penetrating radar. A March study shows that one large swath of the ice sheet sits on beds as deep as 8,000 feet below sea level and is connected to warming ocean currents. Totten Glacier, one of East Antarctica’s largest ocean outlets, is already thinning — an ominous sign, since this single glacier drains enough ice to raise the sea level more than all of West Antarctica’s ice loss would.

[This article originally appeared in print as "Antarctica Under Siege."]