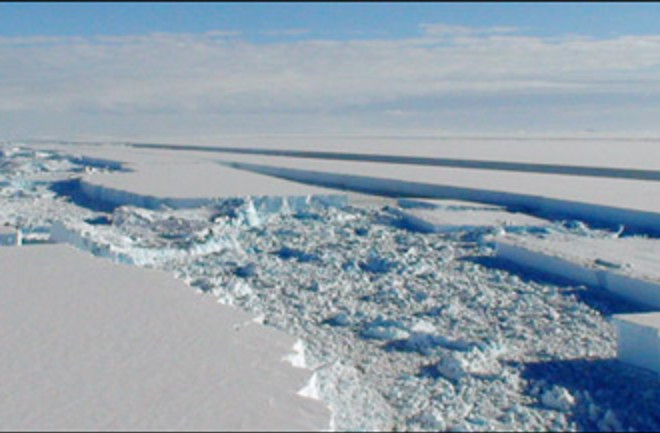 An ice bridge between two Antarctic islands that pinned the vast Wilkins Ice Shelf in place has splintered, and researchers say the change will probably accelerate the disintegration of the ice shelf, which is currently the size of Connecticut. Temperatures on the Antarctic Peninsula, which reaches up towards the bottom tip of South America, have risen by five degrees Fahrenheit over the past 50 years; researchers believe the continent is being reshaped by global warming. The ice bridge between the islands Charcot and Latady shattered suddenly, says glaciologist David Vaughan:

"It's amazing how the ice has ruptured. Two days ago it was intact." ... The break left a jumble of huge flat-topped icebergs in the sea. The loss of the ice bridge, which was almost [60 miles] wide in 1950 and had been in place for hundreds of years at least, could allow ocean currents to wash away more of the Wilkins. "My feeling is that we will lose more of the ice, but there will be a remnant to the south," Vaughan said [Reuters].

Since 1950, nine other ice sheets have drastically retreated or collapsed completely around the Antarctic Peninsula. While the latest

break-up will have no direct impact on sea level because the ice is floating, it heightens concerns over the impact of climate change on this part of Antarctica.... Separate research shows that when ice shelves are removed, the glaciers and landed ice behind them start to move towards the ocean more rapidly. It is this ice which can raise sea levels, but by how much is a matter of ongoing scientific debate [BBC News].