And Another One! Third Intense Solar Flare in 24 Hours 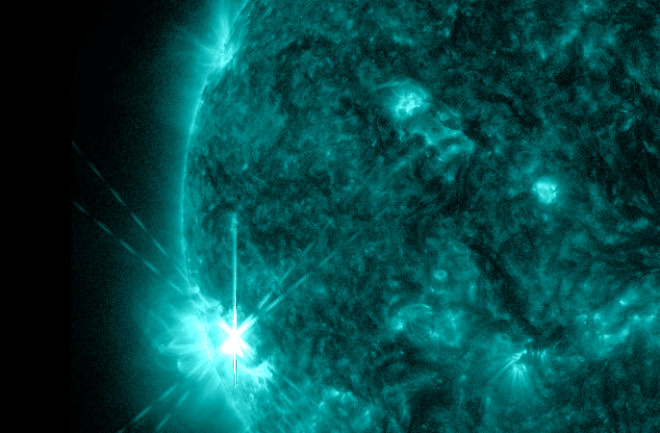 After yesterday's two powerful flares, a third one erupted from the Sun this morning, as seen in this image from NASA's Solar Dynamics Observatory spacecraft. (Source: NASA SDO) Following two very powerful explosions of radiation yesterday, the sun this morning let loose with yet another X-class solar flare. It's the intensely bright spot in the image above (with the Earth shown in the inset at bottom left to provide scale). Scientists say more may be coming in the days ahead — just as the region of the sun that's all hot and bothered rotates into a more Earth-directed position. Solar flares occur when twisted magnetic fields suddenly release gargantuan amounts of energy, producing an explosion of radiation. X-class flares are the strongest of all, and they are capable of producing radio blackouts on Earth. Today, the Space Weather Prediction Center had this to say about the flares and their impact on high frequency radio communications:

After producing a pair of R3 (Strong) Radio Blackouts in quick succession yesterday morning (10/1142 and 10/1252 UTC), active Region 2087 produced yet another R3 event today at 11/0906 UTC. Impacts from this activity were short lived and affected HF communications for the daylit side of Earth at the time of the flare. Continuing chances for more . . . R3 or greater events exist.

Source: NASA Among a number of applications, HF radio communications are used by aircraft for long-range communications, such as on trans-oceanic flights. By disrupting the upper atmosphere, the radiation from solar flares can also disrupt transmissions between GPS satellites and Earth and cause temporary interruptions in cell service. But it's not like this is a new phenomenon. In fact, in 2003 the most powerful flare ever measured with modern methods exploded from the sun, and we seem to have come through that one okay. (Click the thumbnail image to see an image of the event captured by the Solar and Heliospheric Observatory spacecraft.)

Images of three solar flares that occurred within 24 hours — two yesterday and the third today — were captured by NASA's Solar Dynamics Observatory. All three were X-class flares and originated from an active region on the sun that recently rotated into view over the left limb of the sun. (An X-2 flare is twice as powerful as an X-1 flare. Source: NASA) But solar flares aren't they only way that intense solar activity can cause problems here on Earth. They are frequently associated with massive explosions of material from the sun, called coronal mass ejections. A CME can produce fluctuations capable of blowing out transformers in power grids. It can also damage electronics aboard satellites. The largest geomagnetic storm ever recorded happened in 1859. Dubbed the Carrington Event (after a 33-year-old English astronomer who observed the solar flare that triggered the storm), it really did cause mayhem — as described here. Were something like that to happen today, the consequences could be almost unimaginably severe. So thank goodness the odds are small! A CME produced during yesterday's activity is expected to deliver a "glancing blow to Earth" on June 13 and has an "outside chance" of producing a minor geomagnetic storm, according to the space weather center. As I'm writing this post, it does not appear that today's X-class flare produced a coronal mass ejection.