An Alaskan Village Prepares to Move As the Sea Encroaches 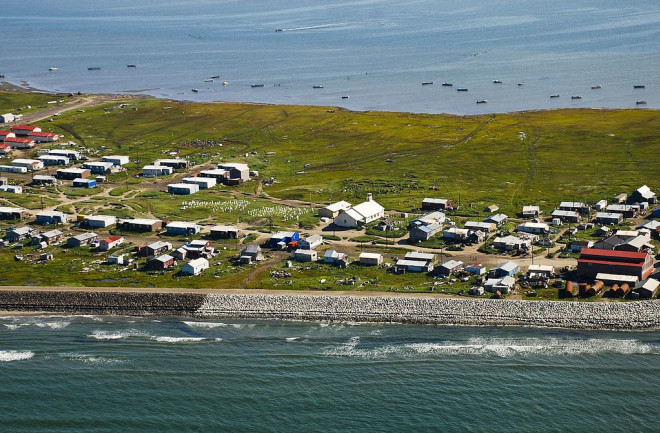 The village of Shishmaref seen from the air. (Credit: Wikimedia Commons) A small Alaskan village near the Arctic Circle has voted to pack up and move as its island slips into the sea due to climate change. Despite the grim circumstances, the vote among villagers was close, with 89 supporting a move and 78 opposing it. The nearly even split speaks to the difficulty of severing ties with a place that has harbored family generations for over four centuries, providing shelter, sustenance and comfort in a place reachable only by boat, plane and sometimes snowmobile.Isolated and Imperiled The village of Shishmaref sits on a narrow barrier island some 120 miles north of Nome near the Bering Strait. For the past 35 years, warming oceans have melted sea ice that once shielded the low-lying island from shore erosion. The island’s permafrost is also melting. The Inupiat Eskimo islanders last voted to leave in 2001, according to Esau Sinnok, an Arctic Youth Ambassador born in Shishmaref who wrote an essay in 2015 detailing the island's plight. But the vote was never put into action because of the steep cost of moving the village to a mainland site some five miles away. In 2004, it was estimated to cost $180 million to relocate the 650 inhabitants to a new site. The financial cost is compounded by the social and emotional aspects of uprooting generations of heritage, including the Inupiat people's traditional hunting and fishing practices on and around the island. Those traditions have been threatened by climate change as well, as the sea ice on which the villagers hunt shrinks. This jeopardizes not only their heritage, but their livelihood as well. Problem Not New A report released this February estimated that some 200 feet of shoreline has been lost since 1969. Around $27 million has already been spent on temporary measures to shore up the shore, the report said, and those repairs will last only about 15 years. Sinnok says that the islanders have already moved 13 houses that were in danger of falling into the ocean. Shishmaref is among 31 Alaskan villages imperiled by warming oceans and rising seas, according to a 2009 report by the Government Accountability Office. Of those, 12 villages plan to move. The costs are prohibitively high, however, and at the time of the government report only one village had made significant headway toward relocation. In all likelihood, Shishmaref will remain in place for the foreseeable future, according to CNN. The logistics of moving an entire village, paired with the cost, mean that any move will take years to enact. The village is something of a bellwether for the nation. As the prospect of rising seas threatens cities from New York to Miami, a tiny village at the end of North America could be only the tip of the iceberg.