Although Joaquin Is Increasingly Likely to Stay at Sea, It Is Still Expected to Produce a "Truly Historic" Wind Event 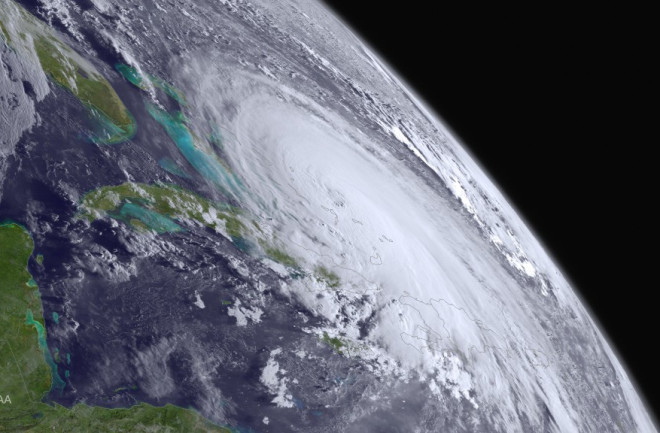 Hurricane Joaquin as seen by the GOES West satellite on October 1, 2015. (Source: NOAA) With 130 mile per hour winds, Hurricane Joaquin has now spun up into a dangerous Category 4 storm — and some additional strengthening is possible, according to this evening's forecast discussion page of the National Hurricane Center. But despite that unsettling news, the weather models have increasingly nudged Joaquin's forecast track to the east. Although it is still too soon to say with certainty that the storm will stay at sea, that is looking increasingly likely.

Infrared data from the satellites of EUMETSAT and NOAA have been laid over a computer-generated model of the Earth, containing NASA's Blue Marble Next Generation imagery, to create this full-disk image of the Earth. Hurricane Joaquin is visible near the center of the image. (Copyright: 2015 EUMETSAT) Even if Joaquin stays offshore, it is now conspiring with a ridge of high pressure far to the north to bring a very long period of sustained onshore winds above 20 miles per hour. They are expected to stretch along an extraordinary length of the coast, from the Carolinas to New Jersey, and bring accompanying storm surges, beach erosion and flooding. https://www.youtube.com/watch?v=gtDL3eparOk Assuming Joaquin stays far enough out to sea, the issue won't be hurricane strength winds. Rather, the issue is the sheer duration of less intense winds blowing onshore, and their wide geographic extent. Hal Needham, a storm surge expert at Louisiana State University has used words like "mind boggling" and "historic" to describe this widespread wind event, which he expects to last for more than 100 hours. From his blog post today at WxShift:

This developing situation is truly historic and has not been observed in the modern history of the Mid-Atlantic Coast.

For now, one of the take home points is that this widespread wind event will create a long-duration storm surge even if Hurricane Joaquin does not make a direct landfall on the U.S. Atlantic Coast. Also, even if Joaquin's storm surge levels do not come close to those produced by Hurricane Sandy (2012) along the Mid-Atlantic Coast, or Isabel (2003) along the [North Carolina/Virginia] coast and Chesapeake Bay, the combination of long-duration surge and heavy rainfall on previously saturated soils may flood some areas that were not inundated from Isabel or Sandy.

Needham spells all of this out in great detail in his blog post. So if you want to learn more, click here.

Meanwhile, the map above gives dramatic witness to the total rainfall amounts that are expected over the next five days. Check out that spot in South Carolina where nearly 20 inches are forecast. As Bob Henson and Jeff Masters put it over at Weather Underground:

Another exceptional part of the story from this weekend into Monday will be the mammoth rainfall amounts expected to fall over parts of the Southeast and mid-Atlantic, particularly South Carolina. These areas are not unfamiliar with torrential rain, especially from landfalling tropical cyclones, but the amounts this weekend will be amazing even by southeastern standards—and this is assuming Joaquin does not make landfall.

Bob, who is a friend and something of a mentor to me for all things meteorological, told me two days ago that it was going to be a very interesting week. Just how interesting is now becoming clear.