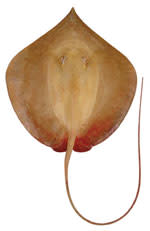 The Hortle's whipray was one of many species discovered this year.

Last year Discover reported on ecologist Drew Allen's research on how much energy it takes to evolve a new species ("10^23 joules, more energy than is released by all the fossil fuels burned on Earth in a year") and his finding that new species emerge faster in warm areas because of all that extra energy flying around.

In a similar vein, some researchers are now saying that global warming could speed up evolution worldwide, according to an article over at Smithsonian.com; even as human-caused climate change triggers the sixth great extinction, the subsequent rebound may already be starting.

Smithsonian's Jen Phillips sensibly hedges her bets about whether climate change will necessarily be that good for life: "Of course, even the best chef can only handle so much heat in the kitchen. Tropical animals will do well, but only to a certain point."