This animation of two images captured by NASA's Terra satellite shows the impact of different weather conditions on air quality over Beijing, which is at the center of both frames. The picture of the city under clear skies was taken on July 5. The image showing China's capital under a thick pall of pollution was captured on January 18 of this year — when the city was suffering what has been dubbed the "airpocalypse." (Images: NASA) Each year, an estimated 2.1 million people worldwide die prematurely as a result of fine particles in the air, and another 470,000 from ozone pollution. These sobering numbers about the impact of air pollution come from a new modeling study published this week in Environmental Research Letters by an international group of 30 researchers. The study, led by Raquel Silver of the University of North Carolina in Chapel Hill, shows that East Asia is hardest hit, with a minimum of about a million deaths annually, and as many as 1.5 million. South Asia was next with about half as many deaths. The animation above dramatizes just how bad things can get in East Asia when weather conditions are conducive to holding in pollutants. It shows Beijing on two different occasions. Both were captured by NASA's Terra satellite. In one image, from this past July 5th, the city is remarkably clear. In the other, from January 18th of this year, the city is mostly obscured by a scrim of air pollution, much of it from very fine particulates, called PM2.5. During that week, the capital city suffered through an episode of extreme air pollution that came to be known as the "airpocalypse." PM2.5 is a particularly severe threat to human health. Exposure to fine particulates is associated with early death from heart and lung disease. The particles can also aggravate heart and lung diseases and trigger cardiac arrhythmias and heart attacks. The new study helps to quantify just how grim a toll this kind of pollution exacts on people around the world. (For more information about PM2.5 pollution, see this FAQ from the U.S. EPA.) I experienced the severity of air pollution in China firsthand during a visit in May. I shot this photo from the 58th floor of a hotel in Shanghai's Pudong district: 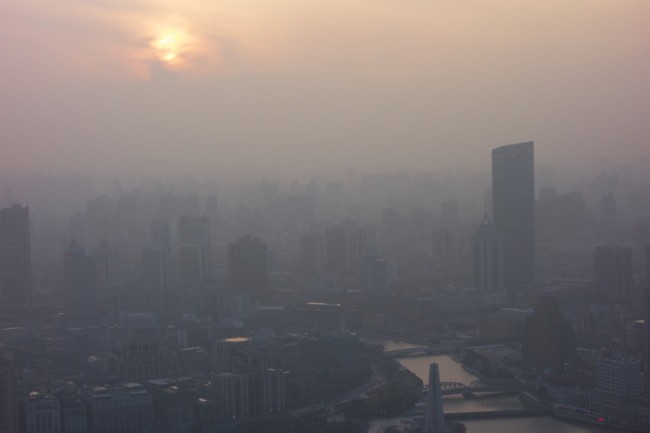 Air pollution obscures the sun and Shanghai's skyline on May 23. (Photograph: © Tom Yulsman) On that day, PM2.5 pollution rose to levels considered unhealthy for all people. Looking back at this photo now, I'm not at all surprised. To formulate their estimates of annual deaths from fine particulates and ground-level ozone (for more information about ozone, click here), the scientists involved in the new research used an ensemble of models to simulate how air pollution concentrations have changed between the years 1850 and 2000. With those numbers in hand, they next used data from epidemiological studies to estimate how many premature annual deaths could be attributed to the increases in air pollution over that period. Here are two maps showing the geographic distribution of excess deaths from the two pollutants, ozone at top and fine particulates at bottom:

These maps from the study show current premature annual mortality due to human-caused air pollution. The top map shows the geographic distribution for ozone and the bottom for fine particulates. (Source: Environmental Research Letters) The particularly high mortality from PM2.5 pollution in East Asia and South Asia is quite evident. But also of note are actual decreases in mortality from fine particulates since 1850 in some regions. Look for the areas colored in blue. The southeastern United States is one of these areas. The drop in early deaths from air pollution there probably stem from decreases in biomass burning in the region since 1850, according to the researchers. The study also examined how climate change may have contributed to premature mortality by exacerbating air pollution. The scientists found an effect, but it was quite small, amounting to a mean increase in deaths of about 3,700 people a year.