After shrinking to a shocking record low at end of winter, Arctic sea ice staged a modest comeback this summer

But despite claims to the contrary, one warmish summer in the Arctic does not repeal the long-term trend of human-caused warming 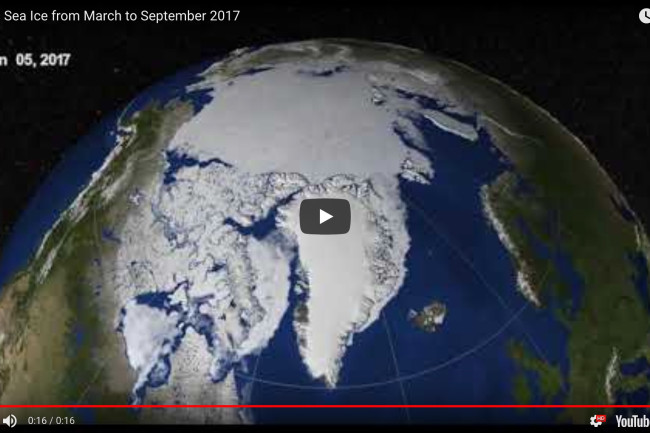 This visualization shows how the extent of Arctic sea ice has evolved through time. The animation begins when the ice reached its wintertime maximum extent on March 7, 2017, and it ends on September 13, 2017, when the ice shrank to its minimum extent for the year. (Source: NASA Scientific Visualization Studio/Helen-Nicole Kostis) Arctic sea ice has staged something of a short-term turn-around this summer. The underlying long-term warming of the region, caused by our emissions of heat-trapping greenhouse gases, has not abated. But relatively cool and cloudy weather in the high north during summer caused the sea ice to shrink less extensively than in some recent years. When the ice reached its minimum extent for the year on September 13th, it turned out to be eighth lowest in the 38-year record of satellite observations, according to a preliminary analysis released yesterday by the National Snow and Ice Data Center. This is especially noteworthy because the melt season began in March with sea ice at a record low for that time of year, thanks to unusually warm temperatures in winter that had caused sea ice to expand very sluggishly. But then the weather shifted. Another factor was at work too: Relatively warm winter temperatures had enhanced snowfall onto the ice in parts of the Arctic. That slowed its summertime melt-out. Even so, the minimum ice extent reached on September 13th was 610,000 square miles below the 1981 to 2010 median extent for that day – an area equivalent to about one sixth of the total area of the United States. 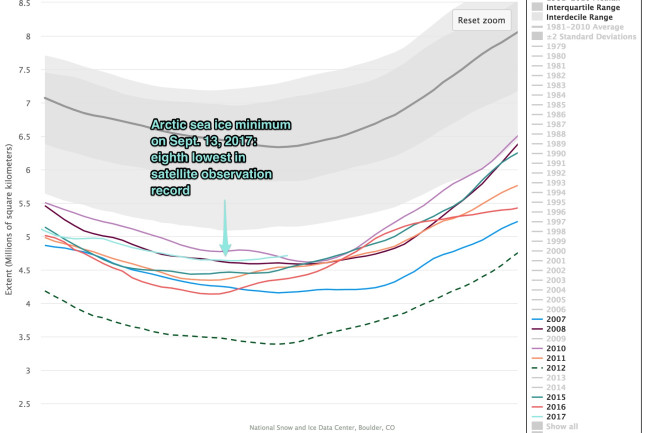 Source: NSIDC (with added labeling) In the graph above comparing eight years of minimum Arctic sea ice extents, have a close look at 2012, 2016 and 2007. These are the three years with the lowest Arctic ice extents on record. As it turns out, those years brought unusual weather conditions, including strong summer storms that beat up the ice cover, helping to accelerate melting. Conditions were different this year. Persistent low atmospheric pressure at sea level in the central Arctic this summer resulted in cooler than average temperatures. And the counterclockwise pattern of winds around the low pressure system tended to spread the sea ice over a larger area, according to the NSIDC. “How much ice is left at the end of summer in any given year depends on both the state of the ice cover earlier in the year and the weather conditions affecting the ice,” says Claire Parkinson, senior climate scientist at NASA’s Goddard Space Flight Center in Greenbelt, Maryland, quoted in an agency sea ice update. “The weather conditions have not been particularly noteworthy this summer. The fact that we still ended up with low sea ice extents is because the baseline ice conditions today are worse than the baseline 38 years ago.” 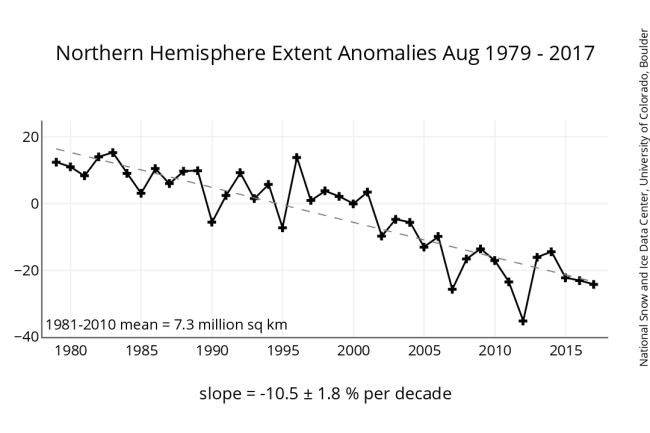 Arctic sea ice extent for the month of August has been declining at a rate of about 10 percent per decade since 1978. (Source: NSIDC) It all adds up to this: Some years the fickleness of weather helps bring dramatic, record-setting lows to Arctic sea ice, and in other years, not so much. But over the long-term, despite up and down wiggles, the trend line is undeniably clear – as the graph above shows. So don't believe any claims you may hear that this summer's modest, short-term comeback somehow means there is no long-term trend of human-caused warming in the Arctic. Nothing could be further from the truth.