After Mosquitos, Moths Are the Next Target For Genetic Engineering 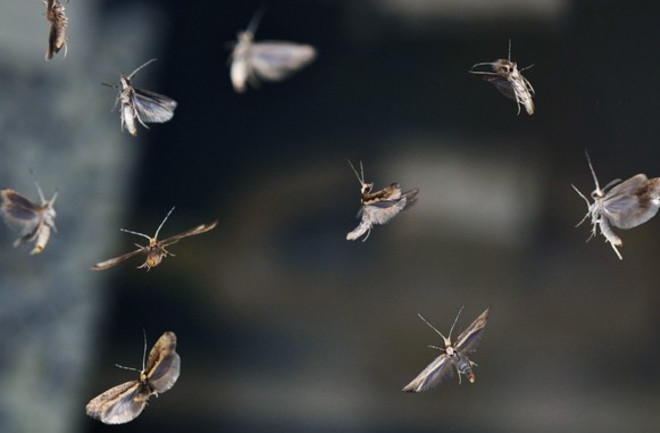 Diamondback moths. (Credit: Oxitec) Though genetically modified crops may steal the spotlight, similarly reprogrammed insects may have just as big an effect on the agricultural industry. Biotechnology company Oxitec is moving forward with plans to develop genetically engineered diamondback moths in an attempt to reduce populations of the invasive crop pest. Their plan is to release males that will pass on a gene preventing female offspring from reaching maturity and reproducing, which they say will eventually eradicate the moths in North America. Tests have so far been positive, although there are still worries about the prospect of releasing genetically modified organisms into the wild.

Currently, pesticides are used to control the moths, which are responsible for an estimated $5 billion worth of damage every year in the U.S. An invasive species, the diamondback moth originated in Europe, but has proved difficult to control since appearing the U.S. due to short gestation times and the large numbers of eggs females lay at once. Oxitec says that their technique is preferable to pesticides, as the moths have proven capable of evolving resistance to the compounds in the past, and most carry some risk to the environment and human health. Oxitec cites a USDA analysis that found no risk of significant impact in an earlier test of the GM moths as evidence that their technique is safe, but the prospect of GM insects raises fears that the moths may proliferate beyond targeted areas and cause impacts on the broader ecology. Similar techniques have been applied before, reaching as far back as the 1950s when sterile screwworm flies were released in Florida, effectively eliminating the parasitic species there. Impotent mosquitos, also manufactured by Oxitec, have been used to combat Zika in South America, and plans to implement the same procedure in Florida are underway.

The successful screwworm campaign relied on blasts of radiation to sterilize the males. Oxitec's technique uses gene editing engineering to implant males with modified DNA that ensures female caterpillars don't survive to adulthood. In the case of the moths, males need not be targeted because it is only the female caterpillars who are responsible for damaging the crops. They say that tests of the moths, including feeding them to various animals and releasing them in greenhouses, have revealed no ill effects as a result of the genetic modification. Along with the caterpillar-killing gene, the moths are also implanted with a gene that causes them to fluoresce red under UV light, the better to identify them in the wild.

The FDA found no issues preventing the company from moving forward, but because the moths are an agricultural pest, the USDA must weigh in as well. Oxitec is currently waiting on USDA approval to conduct expanded tests at a site in New York in conjunction with Cornell University. They hope to release the moths in a contained cabbage field to see how effective their modifications are. Most opposition to genetically modified insects is based on the prospect of altered organisms spreading beyond the areas they are released. In the case of the diamondback moth, Oxitec says that the nature of the modification, which precludes breeding, should serve to limit the spread of the GM moths, and pesticides and freezing winter conditions should take care of the rest. While there is a precedent for this kind of technique in screwworms, those insects were uniquely suited to sterilization-based population control because of their life-cycles. Moths may present additional challenges. Kevin Esvelt, a professor at MIT and leader of the Sculpting Evolution Lab agrees that the general concept is sound: "The whole point is to harm the next generation of organisms. And since they carry the relevant genetic construct, it's necessarily going to decrease," he says. "It will not persist in the environment over time as long as the genetic construct is doing what it's supposed to do."

Not A Gene Drive

This marks a crucial difference from a gene drive, a technique often associated with genetically modifying populations. The hallmark of a gene drive is tweaking genes to increase the chances that a particular trait will be passed on to offspring. The odds are normally 50/50, but a gene drive can tilt them in favor of a particular set of genes, causing a trait to spread through a population. This is helpful when a trait is detrimental to an organisms survival and would normally be weeded out by natural selection. Gene drives haven't yet been applied in the wild, though, and likely won't be for many years. Oxitec's moths possess no such scale-tipping modifications that could cause the modified genes to spread across the globe, they merely pass on genetic material in the normal way. Part of this genetic material, however, has been changed to ensure that female caterpillars with the gene don't survive. "From a technical perspective it's a perfectly sound approach, it probably offers fewer risks than current approaches using pesticides. In general I am a fan of using biology to solve ecological problems as opposed to chemistry," Esvelt says. Still, he says that field trials are an important step in testing the efficacy and safety of any genetically modified organism. Along with careful tests, Esvelt advocates for more community involvement in the decision making process, as well attempts to reach out and communicate with critics. Although both the FDA and USDA have a period in place during which the public can comment, Esvelt says more communication should be done earlier.