A Year of Weather in Just Eight Minutes 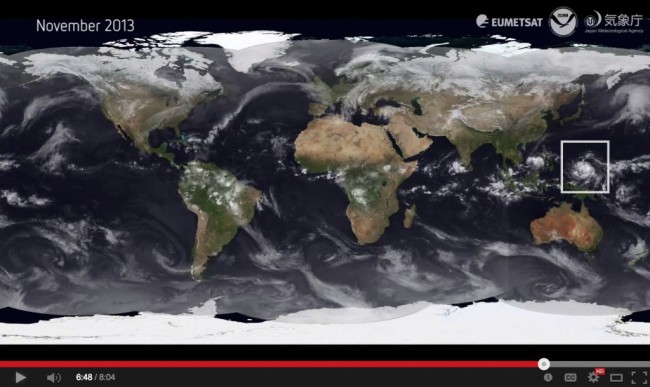 This astonishing video shows a year of weather — day by day by day — in just eight minutes. If you haven't seen it elsewhere yet, I urge you to watch.

The video is comprised of satellite images from European, Japanese, and American satellites. They were compiled into the video by EUMETSAT. The background comes from NASA’s Blue Marble project.

The image above is a screenshot from November, just as Typhoon Haiyan was spinning up and barreling toward The Philippines. The storm is inside the white box to the right.

Haiyan was one of the strongest tropical cyclones on record, and you can see it smashing into the Philippines, where it killed more than 6,000 people, and then Vietnam, where it also caused much devastation.

When I watched the video, powerful weather fronts and swirling storm systems spun up by Earth's rotation certainly caught my eye. But I was particularly struck by daily rhythms. I get a true sense of a living, breathing planet.