A Twilight Run in the Flood Zone 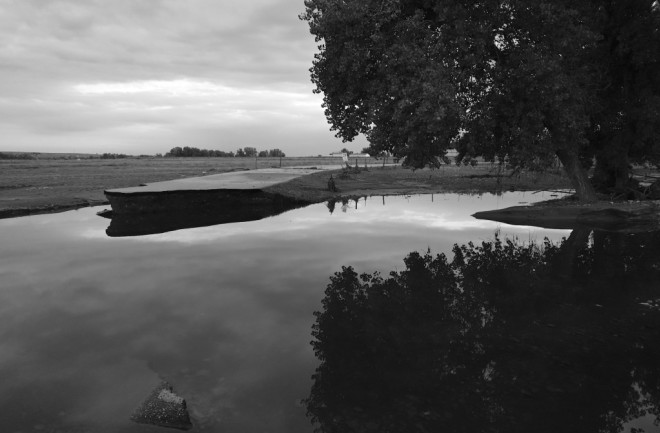 During the Colorado deluge, Left Hand Creek north of Bolder jumped its banks and carved a new channel for itself, taking out the road to the Left Hand Water District's treatment facility. (Photo: © Tom Yulsman) In the aftermath of the Colorado deluge, there's now a semblance of wilderness in some places out on the plains that sprawl from the base of the Rocky Mountains. And I've discovered that running is a great way to explore it. As a runner I can cover a lot more ground than walking. I can get into places that I couldn't hope to access with a car, including places that are ostensibly closed. (Please don't tell the sheriff...) And I can carry a pocket camera in a pouch on my water belt. I took the photo above in the flood zone west of where I live in the little town of Niwot, about 7 or so miles northeast of Boulder. Left Hand Creek, ordinarily a lazy trickle by this time of year, was transformed into a rampaging monster during the unprecedented rainfall that began last week and continued for days, killing seven, flooding 1,918 miles across 17 Colorado counties, destroying at least 1,502 homes, and damaging another 17,494. At a small bend in the river along Nimbus Road, the monster leaped out of its channel and basically decided to carve a brand new one. As it did so, it amputated the road in the image at the top of the post, which leads to the Left Hand Water District treatment plant — from which I get my water. (Click here for a picture of the area shot from an aircraft. The road at center-left in the image is the one that has been cut off in my photo above.) Back in 1882, Left Hand Creek actually figured in a decision by the Colorado Supreme Court that became the basis for all water law in most of the Western United States. It's a fascinating story involving — in true Western fashion — an armed showdown over access to water . You can read about the details here and here. Suffice it to say, that Left Hand Creek has not behaved this way in all the intervening decades. I'm still blown away by what I found in the flood zone west of Niwot. With a bulldozer, someone has managed to build up a kind of levee that has returned the still rushing river to its original channel. Left behind in the short-lived one along Nimbus Road is a layer of mud and river boulders about three feet thick. To be honest, I was a little worried on my run that the resident coyotes would come after me. I saw some of their tracks in the smelly mud that threatened to swallow my feet like quicksand. There's no traffic through this area anymore — it's all blocked off. And I saw no one else out on the muddy and bouldery former route of Nimbus Road. So it would seem that the critters now have the place pretty much to themselves.