A thunderstorm blowing its top, as seen from space 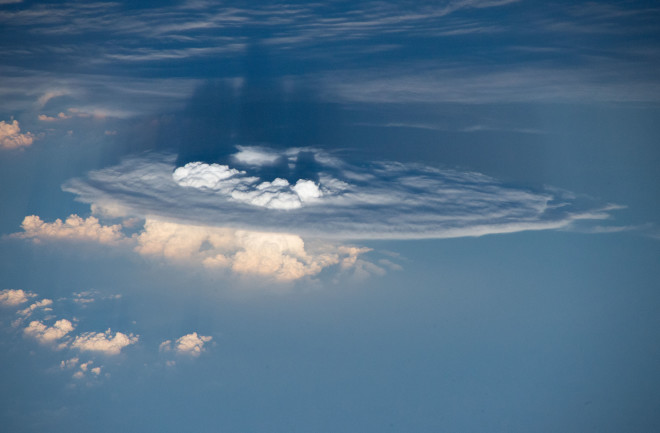 Updrafts from a strong thunderstorm punch through the boundary between the troposphere, the lowest region of the atmosphere, and into the stratosphere, as seen in this photograph made by an unidentified astronaut aboard the International Space Station toward the end of March 2016. The boundary between the two atmospheric layers is marked by the broad anvil-shaped cloud. (Source: NASA) When I saw this sweet piece of eye candy, produced recently by an astronaut aboard the International Space Station, I felt it was time to come out of blogging hibernation. Over the past couple of weeks, my day job as a journalism professor at the University of Colorado has held me back from posting regularly here at ImaGeo. But thanks in part to this image, I'm back. I hope you find it to be as spectacular as I do. You're looking at a thunderstorm as photographed by an unnamed astronaut aboard the International Space Station some time in late March. It's a great example of a phenomenon called "overshooting tops." Here's what the phenomenon looks like from an airplane:

A thunderstorm as photographed from a DC-3 aircraft over Oklahoma. (Source: NASA) The anvil shape visible in the cloud structures in both images marks what's known as the tropopause. This is the boundary between the troposphere, the layer of the atmosphere closest to Earth's surface, and the stratosphere above it. Ordinarily, the tropopause acts like a ceiling, deflecting a thunderstorm's upwelling currents of warm, moist air. As these updrafts hit the ceiling, they spread out, forming an anvil shaped cloud. But if the updrafts are powerful enough, they can punch through the ceiling. Both of the images above shows what that looks like: protrusions that bubble up from the flat anvil. These overshooting tops are often indicative of thunderstorms capable of producing severe weather on the ground. https://youtu.be/EFOffqMk7nE Watch the video above, from the ever-awesome Cooperative Institute for Meteorological Satellite Studies, to see overshooting tops punch through the troposphere in storms that produced tornadoes, large hail, and damaging winds across parts of Minnesota, Iowa, Wisconsin, and Illinois on June 12, 2013. The video consists of imagery from the GOES-14 satellite operating in a special mode in which it acquires an image every minute, as opposed to every 30 minutes. As thunderstorms boil up, watch for the overshooting tops punching higher than all the other clouds.