A Tale of Two Poles: Sea Ice in Antarctica Surged in September to Record Extent But Remained Low in the Arctic

Antarctic sea ice concentration from September 1 to September 30, 2014. The data come from the AMSR2 satellite instrument. (Source: NSIDC/University of Bremen) Even as climate change continues to be felt around the world, its impact in the Arctic and Antarctic are, in part, a tale of two poles. The National Snow and Ice Data Center is out today with its annual review of sea ice conditions, and in the Arctic the news is in keeping with what has happened in previous years: the geographic extent of this floating veneer of frozen sea water remains low. 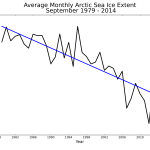 Source: NSIDC That extent typically reaches its lowest point in September, after a summer of sun and relatively warm temperatures in the far north. As I reported previously, this year, the low point was hit on September 17th. It was the sixth lowest in the satellite record, which stretches back to 1978. This continues a long-term trend: The monthly September ice extent from 1979 to 2014 has declined 13.3 percent per decade compared to the 1981 to 2010 average. (Click on the thumbnail image at right for a graph showing that trend.) One very legitimate question to pose is what Arctic sea ice concentrations were like going farther back in time. That's difficult to pin down precisely, because of the lack of accurate and geographically extensive records. But scientists have made some estimates using indirect records. Here's how NSIDC explains it:

To look back into the past, researchers combine data and records from indirect sources known as proxy records. Researchers delved into shipping charts going back to the 1950s, which noted sea ice conditions. The data gleaned from those records, called the Hadley data set, show that Arctic sea ice has declined since at least the mid-1950s. Shipping records exist back to the 1700s, but do not provide complete coverage of the Arctic Ocean. However, taken together these records indicate that the current decline is unprecedented in the last several hundred years. 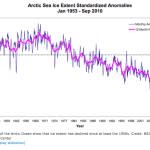 Source: NSIDC and UK Hadley Center The graph at left is a record of Arctic sea ice extent going back to the 1950s. (Click on it to enlarge it.) Meanwhile, in the Southern Hemisphere, something very different is going on. In my earlier story, posted on September 24th, I noted that during the cold of winter, Antarctic sea ice had surpassed the previous record maximum set in 2013. Today, the NSIDC is reporting that the maximum extent for the year was likely reached on September 22, and with the onset of the warmer season, sea ice is probably shrinking now. The NSIDC is also reporting an unusual event in September:

So in just 13 days, 299,000 square miles of open ocean became covered in floating ice — an area larger than Texas! The animation at the top of this post shows how the concentration of sea ice changed around Antarctica during the entire month of September. If you look carefully at the lines of latitude as the animation progresses, you can see the ice concentration growing pretty significantly in several places. 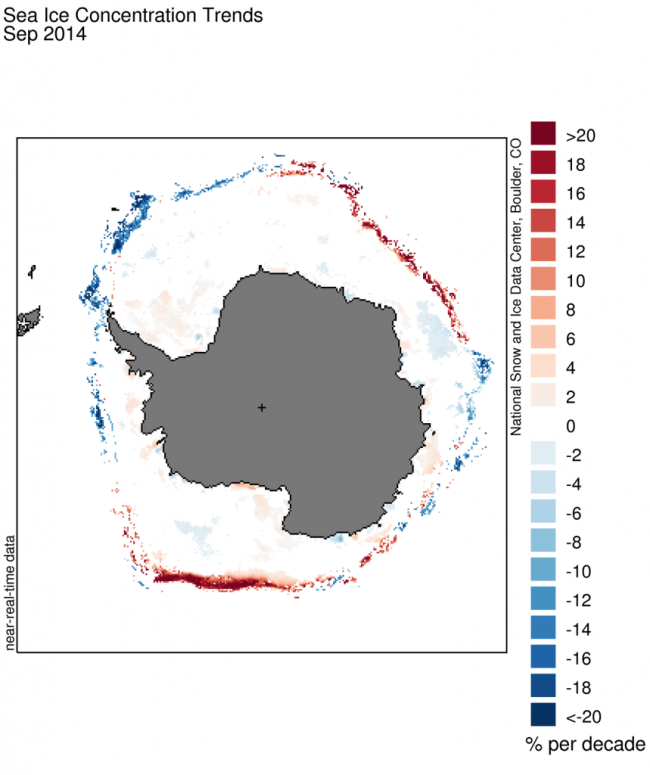 September sea ice concentration trends for the month of September, 2014 around Antarctica. Oranges and reds indicate higher concentration trends; blues indicate lower concentration trends. (Source: National Snow and Ice Data Center) Antarctic sea ice grew most significantly this year in areas that have also seen the biggest long-term gains. In the map above, those areas are indicated in oranges and reds. Why this growth in Antarctica despite global warming? According to today's NSIDC report, wind patterns may be playing a significant role. But there is another possibility as well. As relatively warm, deep ocean water has been reaching the Antarctic coastline, it has caused some melting of ice sheets. This, in turns, makes the surface water slightly less dense. And as NSIDC puts it:

While the change in saltiness is too small to significantly affect the freezing temperature, the increase in slightly less dense water surrounding Antarctica inhibits mixing, creating conditions that favor ice growth (as we discussed in our July 17 post).