A Superstorm for Superbowl Sunday

An animation consisting of false-color GOES-West satellite images of the huge storm in the northeastern Pacific Ocean. (Source: Space Science & Engineering Center) Just in time for the Superbowl: a super-sized storm swirling in the northeastern Pacific Ocean that's pushing up waves possibly as high as apartment houses. You can see it just south of Alaska in the animation of false-color weather satellite images above. And here's a true-color view, captured by NASA's Terra satellite yesterday: 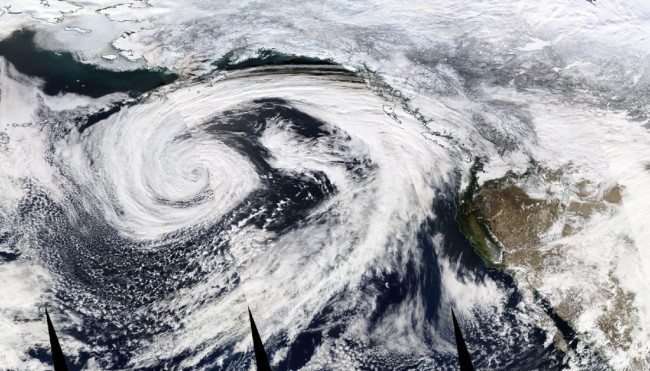 The Pacific Ocean storm, as seen by NASA's Terra satellite on Saturday, Jan. 31, 2015. (Source: NASA) Thanks to strong winds with gusts up to 80 miles per hour, the waves in this part of the Pacific Ocean have been scarily high (if not unusually so). 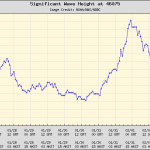 Source: NOAA/NWS/NDBC A buoy located 85 miles south of Sand Point, Alaska in the Aleutian Islands measured significant wave heights reaching 26 feet — that's taller than a typical two-story building. (Click on the thumbnail at right for a graph plotting the measured wave heights at this buoy's location.) Significant wave height is the average height of the tallest third of all individual waves. This is probably what you would perceive as the average wave height if you were in that spot at sea. That's because these largest waves overwhelm the smaller ones in our perception. But also consider that 26 feet is an average for the tallest waves at this buoy's location. That means some individual waves are significantly higher. In fact, the largest individual wave will be roughly twice as high as the significant wave height. So for this storm, some waves might be 50 feet high — apartment-house sized. Imagine trying to ride that out in a boat. Have a great Superbowl Sunday everyone!