A Stunning Piece of Earth Art Etched by Water and Ice 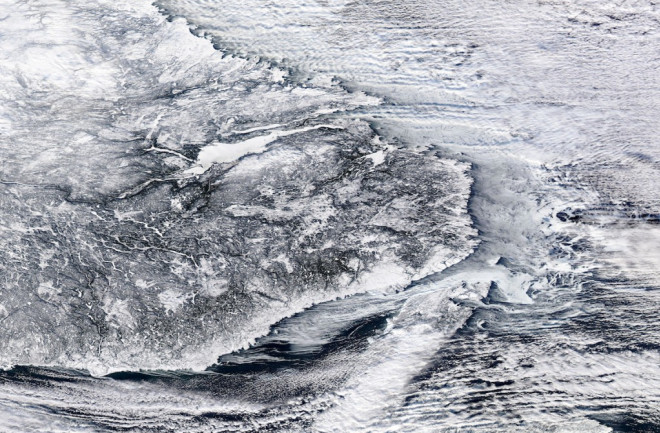 A large part of Labrador and a sliver of Newfoundland are visible in this natural color image captured by NASA's Aqua satellite on Thursday, Jan. 8, 2013. (Source: NASA) Most nights, I go on a world tour — all the way around the Earth in just a few minutes. And not surprisingly, I'm frequently amazed by what I find. My touring is done virtually, using NASA's amazing Worldview, an online tool that allows you to interactively browse global satellite imagery almost in real time. And on my virtual wanderings this evening I found the striking scene at the top of this post. Captured by the Aqua satellite today, it shows Labrador, Canada, jutting out into the Atlantic. It was the astonishingly fine etching of the geographic features, the sea ice, and the clouds that stopped me in my tracks, along with the near black and white appearance of the scene (the result of a snowy, winter landscape). If I squint my eyes just a bit and forget about geography I could swear that I am looking at an artistic wood cut of some sort. Labrador is part of the Canadian Shield, which is the very ancient tectonic core of the North American continent. Pleistocene Epoch ice sheets once covered the ancient metamorphic rocks of the shield. The ice scraped away most of the landscape's topsoil, contributing to the appearance we see above. It also gouged out the basins for many lakes. The image also reveals the geologic etching done by the region's many rivers. They all appear white here — because they're frozen. If you find this image compelling, give Worldview a try. You never know what you might find.