A Powerful Volcanic Blast That Took Scientists By Surprise 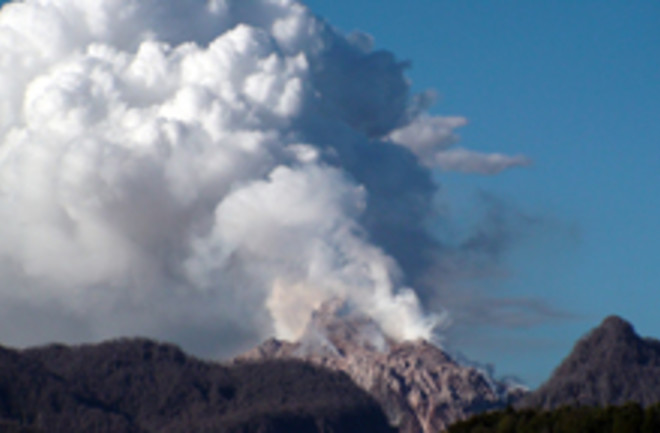 Some of the world's baddest volcanoes, like Chile's Chaitén volcano that erupted in 2008, are actually even worse than scientists previously thought. A study of Chaitén's eruption revealed that locals only had 30 hours to to flee from first time they felt rumbling, not the weeks or months that it typically takes a volcano to go from tremors to eruption. That's because Chaitén is a rhyolitic volcano; these volcanoes are

largely fueled by a silica-based, very flow-resistant magma and they tend to build pressure over time before erupting violently [National Geographic News]. Thousands were able to escape before

Chaitén's blast, but scientists are warning that others living in the shadow of a rhyolitic volcano may not be so lucky. The magma of the Chaitén volcano traveled up to 3 feet per second, according to the study published in Nature.

It shot from a depth of more than five kilometres [3 miles] to the surface in about four hours.... The violent and unexpected nature of the blasts, together with their rarity, means the Chaiténeruption is the first rhyolite event to have been scientifically assessed in this way [ABC News].

In the U.S. there are large rhyolitic volcanoes in Wyoming, California, and New Mexico as well as in the Japanese islands and New Zealand's Taupo Volcanic Zone. Scientists are saying that even though rhyolitic eruptions are rare, the study should serve as a warning call to step up monitoring of potentially active volcanoes. Related Content: 80beats: In the Permian Period, Erupting Super-Volcanoes May Have Killed Half the Planet 80beats: Forget “The Asteroid”: Could Supervolcanoes Have Killed the Dinosaurs? 80beats: Undersea Volcanoes Decimated Marine Life in the Primordial Oceans