A New Paradigm Will Help Navigate the Anthropocene

As anyone who follows environmental discourse knows, sustainability is more than a popular buzzword. It's a concept that frames all discussion on climate change, development, and ecological concerns. For example, today's line-up of sessions at the annual American Association for the Advancement of Science (AAAS) meeting includes a panel called, "Getting to Global Ecological Sustainability: Climate and Small-Planet Ethics." But what if there is no getting to global sustainability, because it's an impossible goal? This is an argument that is put forward compellingly by advocates of the emergent resilience paradigm. Resilience, in ecological circles, is defined as

the capacity of an ecosystem to respond to a perturbation or disturbance by resisting damage and recovering quickly.

It's an idea that is more compatible with the way the world actually works--not just ecologically, but at a societal level, too. Several months ago, Andrew Zolli wrote in the New York Times:

For decades, people who concern themselves with the world’s “wicked problems” — interconnected issues like environmental degradation, poverty, food security and climate change — have marched together under the banner of “sustainability”: the idea that with the right mix of incentives, technology substitutions and social change, humanity might finally achieve a lasting equilibrium with our planet, and with one another. It’s an alluring and moral vision, and in a year that has brought us the single hottest month in recorded American history (July), a Midwestern drought that plunged more than half the country into a state of emergency, a heat wave across the eastern part of the country powerful enough to melt the tarmac below jetliners in Washington and the ravages of Hurricane Sandy, it would seem a pressing one, too. Yet today, precisely because the world is so increasingly out of balance, the sustainability regime is being quietly challenged, not from without, but from within. Among a growing number of scientists, social innovators, community leaders, nongovernmental organizations, philanthropies, governments and corporations, a new dialogue is emerging around a new idea, resilience: how to help vulnerable people, organizations and systems persist, perhaps even thrive, amid unforeseeable disruptions. Where sustainability aims to put the world back into balance, resilience looks for ways to manage in an imbalanced world.

As much as I think this is the way forward, I very much doubt that the "sustainability" frame will go quietly into the night. It has become an all-encompassing, institutional term, invested with powerful, symbolic meaning. (Think of it as an offshoot of the "balance of nature" meme, which still shapes much of our popular environmental discourse.) Still, the notion that there is a path to a sustainable world is wrong-headed, Zollie explains in his NYT piece:

Unfortunately, the sustainability movement’s politics, not to mention its marketing, have led to a popular misunderstanding: that a perfect, stasis-under-glass equilibrium is achievable. But the world doesn’t work that way: it exists in a constant disequilibrium — trying, failing, adapting, learning and evolving in endless cycles. Indeed, it’s the failures, when properly understood, that create the context for learning and growth. That’s why some of the most resilient places are, paradoxically, also the places that regularly experience modest disruptions: they carry the shared memory that things can go wrong. “Resilience” takes this as a given and is commensurately humble. It doesn’t propose a single, fixed future. It assumes we don’t know exactly how things will unfold, that we’ll be surprised, that we’ll make mistakes along the way. It’s also open to learning from the extraordinary and widespread resilience of the natural world, including its human inhabitants, something that, counterintuitively, many proponents of sustainability have ignored.

The point here is not to beat up sustainability, for as Jamais Cascio wrote several years ago in Foreign Policy, it is a well-meaning, laudable goal. Sustainability, he says,

tells us we need to live within our means, whether economic, ecological, or political -- but it's insufficient for uncertain times. How can we live within our means when those very means can change, swiftly and unexpectedly, beneath us?...As we look ahead, we need to strive for an environment, and a civilization, able to handle unexpected changes without threatening to collapse. Such a world would be more than simply sustainable; it would be regenerative and diverse, relying on the capacity not only to absorb shocks like the popped housing bubble or rising sea levels, but to evolve with them. In a word, it would be resilient.

If there is one thing the age of the Anthropocene is driving home, it is that we humans are in the driver's seat, but we don't know where we are headed. Thus it makes perfect sense that a network of resilience science researchers has made this their creed:

Navigating the surprises of the Anthropocene.

So resilience may be an idea whose time has come. I was glad to see Peter Kareiva of the Nature Conservancy recognize this in his recent discussion with a UCLA class that is exploring environmental communication in the Anthropocene. He mentioned resilience as a promising new frame of reference that could helpfully reposition the dialogue on environmental issues. As Utne magazine put it in 2010: "Forget sustainability, it's time to talk resilience." 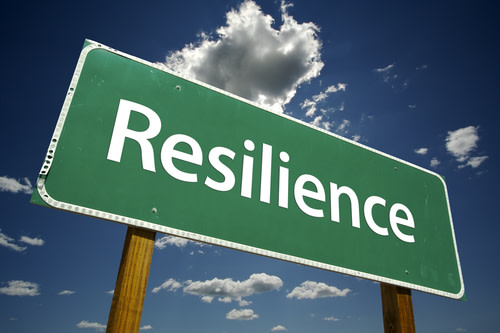