A NASA satellite spotted this strangely prominent pattern of long, sinuous clouds over the Pacific

The conspiracy-minded will shout "chemtrails." Of course that's nonsense. But just what is creating these clouds? 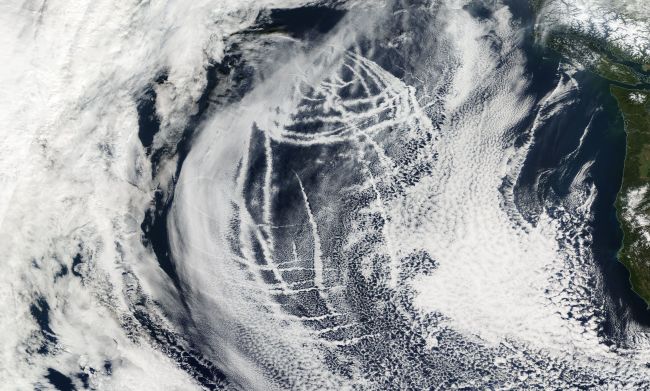 The northeast Pacific as seen by NASA's Terra satellite. (Source: NASA Worldview) I have to admit that I was a little taken aback when I saw these long, sinuous cloud shapes snaking across the northeast Pacific Ocean. The image, captured by NASA's Terra satellite on Feb. 12, 2018, covers a huge amount of territory — as is evident if you look to the extreme right, where a good portion of the west coast of North America is visible. Before I get into what's creating these features, let's get something out of the way immediately: These are not so-called chemtrails — evidence of widespread spraying of chemicals that's part of a government conspiracy to control our minds or, well, whatever. The chemtrail conspiracy has been soundly debunked, including by a survey of 77 atmospheric and geochemists.

Click to see typical airliner routes between the U.S. West Coast on the Great Circle Mapper website. Moving right along... I also quickly dismissed the notion that these were airliner contrails. That's because these don't look anything like typical routes between North America and Asia. (Click the thumbnail image at right to see what those routes look like.) Okay, maybe military aircraft? I don't think so. That would be a huge number of them covering a vast amount of territory. And then finally I had my aha moment: ship exhaust! A check of NASA's Earth Observatory turned up numerous stories with imagery looking just like Terra's above, including this animation: 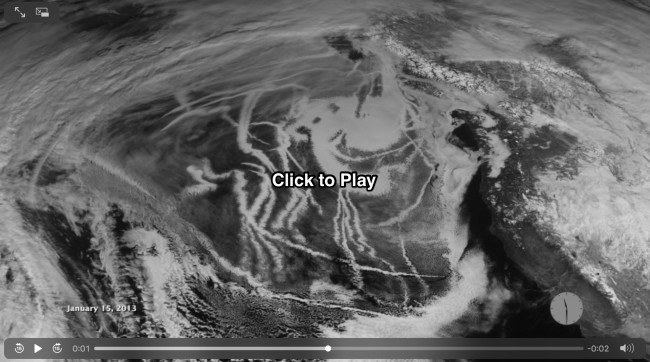 Screenshot from an animation of GOES-West satellite imagery acquired on January 15, 2013, showing an area off of the west coast of the United States and Canada. Multiple ship tracks are visible. (Source: NASA Earth Observatory) Just to make sure, I checked in by email with Scott Bachmeier, a research meteorologist with the University of Wisconsin's Cooperative Institute for Meteorological Satellite Studies. "Those are indeed ship tracks -- a few cases are documented on our blog," he wrote back. For more imagery, make sure to click on that link to the excellent CIMSS satellite blog. So, how do these ship tracks form, and why are they so very prominent? It all starts with tiny particles — byproducts of combustion in the ships’ engines — that are spewed into the atmosphere. Each one of these aerosols is a tiny seed around which water vapor in the atmosphere can condense. That condensation creates cloud droplets. And as a ship moves, a trail of these cloud droplets is left behind. Here’s why they are so prominent: Although the atmosphere over the ocean holds natural aerosols such as sea salt and dust, ships spew out a very concentrated load. So with more nuclei, more cloud droplets are formed. Moreover, these droplets are smaller than natural atmospheric aerosols. And as it turns out, smaller droplets reflect more sunlight than bigger ones. So the tracks they form are brighter than natural clouds.