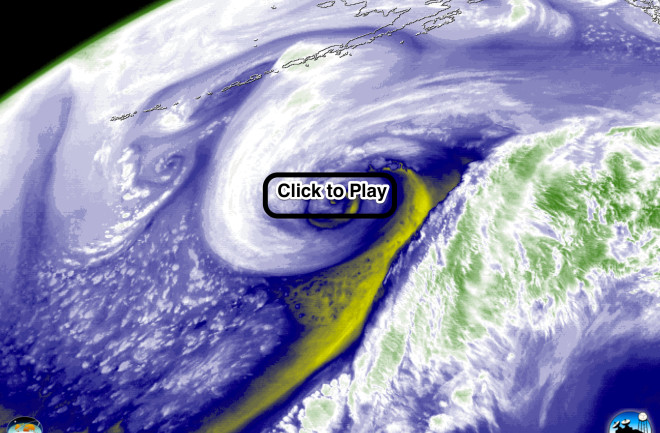 A powerful cyclone swirls in the Northern Pacific Ocean off Alaska in this animation of satellite water vapor imagery. (Source: CIMSS) I spotted this beautiful animation of a powerful Pacific Ocean cyclone in the Twitter feed of Scott Bachmeier from the Cooperative Institute for Meteorological Satellite Studies. It's so awesome that I just had to share it. The storm, as seen in the animation of GOES-15 weather satellite images above, has been spinning up in the Pacific Ocean and is headed into the Gulf of Alaska. As I'm writing this, the National the National Weather Service has issued a hurricane-force wind warning, which means the storm has either achieved hurricane strength (sustained winds of greater than 74 miles per hour), or it is predicted to do so. (For the latest Pacific high seas forecast, go here.) It's important to note that this is not a hurricane, since it is not a tropical cyclone.

Click on the thumbnail at right for the surface analysis from the Ocean Prediction Center of the National Weather Service. The hurricane-force low is clearly marked there. The powerful Pacific storm has a particular characteristic noted by Bachmeier in his Tweet: It's an "occluding cyclone." The explanation is a bit complicated. (You can find the details here.) Suffice it to say that occlusion happens when a cold front overtakes a warm front as a cyclonic system is forming. In the surface analysis diagram, the cold front is marked as a blue line with little protruding triangles. The warm front it's overtaking is a shorter red line with red semi-circles. Where they come together is an "occluded front," marked with both triangles and semi-circles. Here's what the powerful storm looked like in visible imagery acquired by the GOES-15 satellite on Saturday afternoon (Feb. 6):

GOES-15 visible imagery of a powerful cyclonic storm in the North Pacific. (Source: GOES Project Science) If you carefully compare the surface analysis diagram with this image you may be able to make out the point where the cold front overtakes the warm front. Regardless, this is a big, photogenic storm. And an even bigger one — a so-called "bomb" cyclone — is coming, thanks to a persistent pattern in the northern Pacific. From the forecast discussion of the National Weather Service in Alaska today:

THE REGIONAL SYNOPTIC PATTERN CONTINUES TO REMAIN LOCKED IN A PERSISTENT PATTERN... DRIVEN STRONGLY BY A STOUT NORTH PACIFIC JET STREAM...WHICH IS RESPONSIBLE FOR SPINNING UP POWERFUL LOWS BEFORE THEY MOVE INTO THE GULF [of Alaska].

ARE IN VERY GOOD AGREEMENT WITH THE POWERFUL BOMB CYCLONE WHICH WILL DEVELOP SOUTHWEST OF THE FAR WESTERN ALEUTIANS LATE SUNDAY AND MONDAY. FORECAST CONFIDENCE IS VERY HIGH.

Another word for this is "bombogenesis." That doesn't mean the weather Gods will be dropping an H-bomb. Instead, it means that the forecast mid-latitude cyclone will develop very rapidly — explosively fast, if you will. (More scientifically, "bombogenesis" means a drop in atmospheric pressure of at least 24 millibars over just 24 hours.) I've written about this amazing phenomenon a number of times, including here: Bombogenesis baby!: The Pacific Ocean just got a double-barreled blast from two exploding storms I suspect we'll be seeing more awesome imagery as the parade of storms continues across the northern Pacific. (And let's just hope that water-starved California continues to pick up it's share of Pacific moisture!)