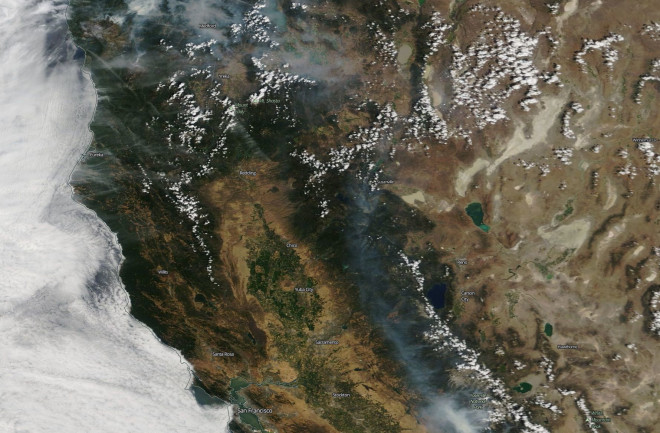 Satellite view of California and Oregon on July 23, 2018. Smoke from the Ferguson Fire near Yosemite National Park is visible in the lower right quadrant. Another sprawling smoke pall can be seen in southern Oregon at upper left. (Click to open the image and then click again to zoom in. Source: NASA Worldview) You may have heard about California's Ferguson Fire, which has killed one firefighter and is threatening to spread into Yosemite National Park. But a series of other fires, sparked by lighting to the north, are also raging. And now, thousands of firefighters struggling to contain the blazes must contend with a heat wave descending on the region. In the image above, acquired today (Monday, July 23) by NASA's Terra satellite, look for a thick pall of smoke in the lower right quadrant. This is the Ferguson Fire. Another sprawling area of smoke is seen in the upper left quadrant. This is from the fires in southern Oregon. The smoke can be distinguished from wispy white clouds by it's grayish and, in some places, bluish cast. Here's a closer view of the Oregon fires:

Satellite view of wildfires burning in southern Oregon (plus one in northern California) on July 22, 2018. (Source: NASA Worldview) In the image, dense smoke from multiple conflagrations is visible. Red dots indicate where the satellite detected the heat signature of fire. One phenomenon worth mentioning: Check out how smoke has filled in some of the valleys, highlighting their dendritic nature.

Image: NASA Worldview. Annotations: Tom Yulsman All told, 13 major wildfires are burning across 103,603 acres in Oregon. That's an area a little more than half the size of New York City. In the contiguous United States, only my home state of Colorado has more acreage burning right now. (For an annotated version of the satellite image with the names of the fires labeled, click on the smaller version.) Meanwhile, the deadly Ferguson Fire continues to burn in extremely rugged mountainous terrain. Here's a closeup satellite view:

A satellite image of the Ferguson Fire. (Source: European Space Agency/Copernicus) The image, acquired by the Sentinel 2 satellite, shows what the blaze looked like from orbit on July 21. The mountainous granitic terrain of Yosemite is visible at upper right. As of this morning, it had burned 33,743 acres. With 3,066 personnel committed to battling blaze, it is 13 percent contained. "Firefighters are making good progress, according to this morning's situation update. But critical and extreme fire weather is in the forecast for California, and Oregon as well.

Forecast temperature anomalies for three days starting Monday, July 23. (Source: Climate Reanalyzer) In the map above, check out the broad swath of red and orange colors through much of the western part of North America, including almost all of California and Oregon. This is where temperatures are forecast to be above normal over the next three days. This cannot be a happy map for the people who have been called in to fight the fires.