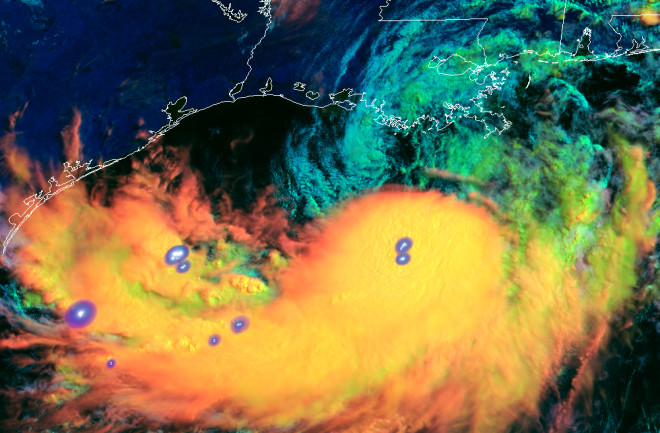 Tropical Storm Barry is now expected to make landfall as a hurricane.

As I’m writing this Thursday afternoon, July 12, Barry is churning slowly over the northern Gulf of Mexico, strengthening as it tarries over warm water. As it nears the coast and then pushes inland, the storm threatens to push up dangerous storm surges and dump up to 20 inches of rain.

Storm surge is already a problem:

The City of New Orleans has ordered people to shelter in place, effective at 8 p.m. local time.

Officials are closing floodgates ahead of what’s expected to be life-threatening flooding along the central Gulf Coast and into the Lower Mississippi Valley.

The distinctive animation of GOES-16 weather satellite images at the top of this post shows Barry over the Gulf between 9 and 11:30 a.m. local time today. Consisting of infrared images collected at one minute intervals, it’s an unusual view (known technically as “Day Cloud Phase Distinction RGB“) showing both the evolution of convective storminess and lightning activity.

Click on the image to launch the animation and look closely at the area just to the north of the thick storm clouds. You should be able to make out Barry’s swirling low-pressure center.

Just to the south, warm moist air is rising vigorously across a wide swath of territory. As this happens, clouds boil up, high and higher into the atmosphere — the phenomenon known as convection.

The false colors help forecasters monitor how the storm clouds are growing. The change in color from orange to bright yellow indicates a transition from thinner to thicker clouds made up of ice crystals. Meanwhile, green colors show where water droplets in clouds are turning into ice particles — a process called “glaciation.”

Lightning activity is seen as flickering blue and white patches. The activity is mapped by a sensor aboard the GOES-16 spacecraft called the Geostationary Lightning Mapper, or GLM.

The sensor continuously detects all forms of lightning at high resolution, both by day and at night, and at a rate never obtained from space before now.

Here’s a view of Barry churning over the waters of the northern Gulf of Mexico this morning:

As with the previous one, this animation consists of images acquired by GOES-16 at one-minute intervals. In this case, the imagery shows the storm in visible wavelengths of light.

As day breaks and the clouds boil up, it almost feels like you’re watching the storm in real time — from a vantage point about 22,000 miles above Earth’s surface.