A Day on Earth: Twisters, Cyclones and Fires (oh my) 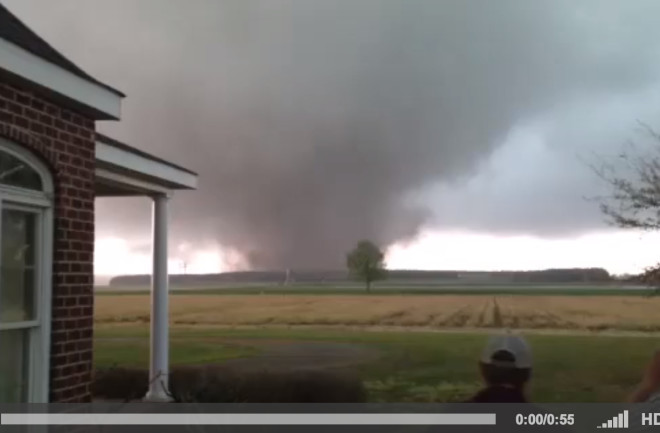 A tornado churns through farmland near Macon, Mississippi on Thursday, April 11. Click on the image for a video. (Image: 4-County Electric Power Association Facebook page) Every day, nature brews up a host of spectacular phenomena, often benign but sometimes quite deadly. Yesterday, April 11, 2013, was no different, and it included its share of nastiness. The day brought a deadly twister to Mississippi, which cut a swath through rural Noxubee County. It's captured in the video screenshot above. (Click on it for the video.) April 11 also saw two cyclones churning in the Indian Ocean, as well as wildfires burning in Australia and elsewhere. I'm sure there were also floods, but I have to stop somewhere... With this in mind, I decided to put together a kind of visual diary of these events. The images I found weren't all captured yesterday. In the interest of showcasing the best picture quality possible, I picked images that span the past two or three days. But there is one image that actually includes every single one of the phenomena I showcase here — all of them from yesterday, April 11. To see it, you'll have to get to the end of the post. So let's continue with another video of the twister in Mississippi:

Another view of the tornado that hit Noxubee County, Mississippi near the town of Macon. Click on the picture for a video. (Image: The Macon Beacon Facebook page) Structures were in its path, and the tornado did kill one person. Other tornadoes have slashed their way through the South over the past few days. But it turns out that tornado activity so far this year has been very low. Meteorologist Jeff Masters reported on his awesome Wunderblog that "Thursday's tornado death brought this year's tornado death toll to three, which is well below average for this time of year...The quiet April for tornadoes follows a very quiet March; the preliminary March tornado tally of eighteen is the lowest for any March since 1978." According to Masters, the low level of tornado activity this spring is due to unusually cool conditions over the eastern two-thirds of the country that have inhibited the atmospheric instability needed for tornadoes to spawn. (In fact, the monthly report from the National Climatic Data Center is expected to show that March 2013 was one of the coolest on record for the contiguous United States. The subject for another post...) As twisters were cutting through the southern United States yesterday, tropical cyclones Imelda and Victoria were dumping prodigious amounts of rain and spawning high winds in the Indian Ocean.

Tropical Cyclone Victoria churns off the west coast of Australia on April 11, 2013. The image was captured by the Modis instrument aboard NASA's Aqua Satellite. (Image: NASA) Cyclone Victoria, seen in the image above, featured a band of thunderstorms stretching out to the north of the storm's center, creating the impression of a letter "J". Click on the picture for a larger version, and look at the center. You'll see the puffy tops of massive thunderstorm cells. Since this image was captured by NASA's Aqua Satellite, the cyclone has dissipated. Meanwhile, to the west, Aqua snapped an infrared portrait of Tropical Cyclone Imelda:

An infrared image of Tropical Cyclone Imelda taken bythe AIRS instrument on NASA's Aqua satellite, taken on April 10, 2013. The strongest convection and thunderstorms are shown in purple. (Image: NASA JPL, Ed Olsen) Imelda had been tracking westward in the Southern Indian Ocean, but just as Aqua flew overhead an area of low pressure nudged the storm to the south. The image above shows that shows that the strongest convection and thunderstorms have been pushed east of the storm's center by wind shear. Imelda may get a bit more powerful before wind shear is expected to quickly weaken it. And lastly, fires...

Fires detected by NASA's Terra and Aqua satellites are seen in this global composite made up of images captured on April 11, 2013. (Image: NASA) Numerous fires are detected every day by satellites. Many, if not most, are small and pose little danger. And a significant portion are set by people for a variety of reasons, including wildfire hazard reduction, and clearing fields. This composite shows all the fires detected by the Terra and Aqua satellites on April 11. (The red dots.) It also happens to show all of the phenomena I've included in this post:

So now I'm wondering: What will tomorrow bring?