A Crater Lake and Pumice Raft in the Pacific right now 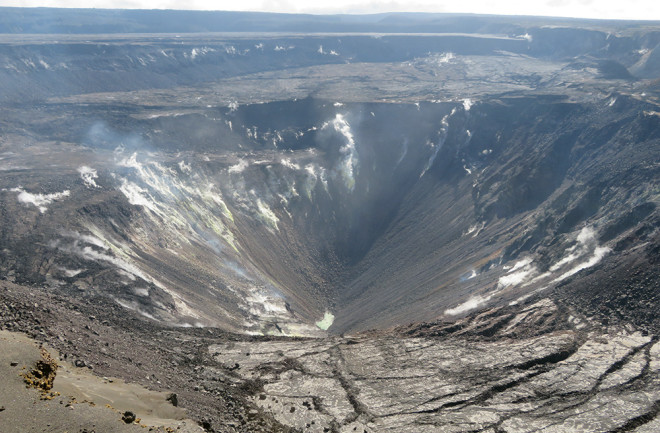 Over the last few weeks, we’ve had two newsworthy events that involve volcanoes and water. This is a common combination on our planet and can have dramatically different results. One is a very small feature that’s new to one of the most active volcanoes on Earth. The other is now a large feature spreading across the Pacific that came from a previously unknown volcano under the sea.

First, the small: the US Geological Survey has been reporting on a new crater lake forming in the Halema’uma’u caldera in Hawai’i (see above and below). It has been almost a year since the last eruption at Kīlauea and as I’ve reported, the summit area might have experienced the most dramatic changes during 2018.

Since then, things have been pretty quiet. The summit area regularly steams with fumaroles thanks to the heat of the volcano and access to groundwater. Remember, when the lava lake at Halema’uma’u drained during the start of the 2018 rift eruption, explosions started when the lake drained below the water table. So, the new collapsed caldera at the summit has some points below that water table … and now one of those pits is filling with water.

The water isn’t clean and cool. No, it is hot and likely acidic, full of dissolved gases from the magma cooling underground. The water is slowly rising at a rate of about a meter per week as the water table recovers.

A close-up shot of the Kīlauea crater lake on August 15, 2019. The surface is steaming and the milky color likely comes from dissolved material like sulfur. (Credit: M. Patrick, USGS-HVO)

USGS geologist aren’t worried that the new crater lake will cause any explosive eruptions right now. However, if magma starts to rise under the summit, then there is a chance for explosions when the hot basalt lava (at ~1200C) hits the surface water. When that happens, the crater lake won’t likely last too long as Kīlauea begins to heal its summit.

Meanwhile, further west in the Pacific, a pumice raft was spotted by a ship near Fiji on August 15 (see below). Pumice rafts are areas of the ocean covered, almost completely, with a layer of floating pumice. This are formed by eruptions that put a lot of these lighter-than-water volcanic chunks into the ocean — and many times, they are coming from submarine volcanoes.

Pumice rafts can drift for weeks to years, slowly dispersing into the ocean currents. These chunks of pumice end up making excellent, drifting homes for sea organisms, helping them spread.

The other thing pumices rafts do is let us find submarine volcanoes that might not recognized as active. In 2012, Rob Simmon (Planet) and I used satellite images to track down the source of a raft that was encountered weeks after an hitherto unknown eruption from a seamount. It turned out to be Havre in the Kermadec Islands north of New Zealand.

This time, the pumice raft off of Fiji was tracked back to the volcanoes in the Tonga arc to the southeast. Simon Can (MTU) found the first signs of the pumice raft in Terra MODIS images from August 7/8 (see below). It appears that the pumice raft came from a previously-unrecognized (see below) submarine volcano between the islands of Late and Fonualei.

UPDATE: Turns out that there is evidence that this eruption came from a submarine volcano that last erupted in 2001. Sadly, this submarine volcano is named “Unnamed” … or well, it lacks a name. Thanks to the Global Volcanism Program for pointing me to this update!

The erupted pumice means this volcano erupts magma high in silica like rhyolite, so you can imagine this like a large, explosive eruption happening thousands of feet below the surface of the ocean.

With submarine volcanoes, especially in remote locations, we get very little warning of an eruption because there is no monitoring equipment to catch earthquakes prior to the blasts. In fact, we didn’t even know this eruption happened until at least a week after it may have started (and ended) … and only because the ship chanced upon the pumice in the seas. Tonga has experienced pumice rafts before from eruptions of Home Reef, which is in this same area near Late Island.

The initial image shows discolored water as well, another telltale sign of an eruption dumping lots of material into the sea. Over the next week (see above), the pumice drifted westward and spread out across more of the Pacific, turning into streamers of tan pumice riding the waves. No more pumice has appeared near first sighting, so it appears that the eruption may be over. You can check out these Terra MODIS images showing the pumice drifting from its source (thanks to Michael Carlowicz for this link).

In both of these cases, water is playing a key role in how a volcano or eruption is evolving. Both are somewhat ephemeral — the crater lake at Kīlauea is not likely to survive in the geologic record while the Tongan pumice raft will be preserved as random pumices that will wash up across the Pacific Basin (or sink to the bottom).