A Crack Opens in the Ethiopian Landscape, Preparing the Way for a New Sea 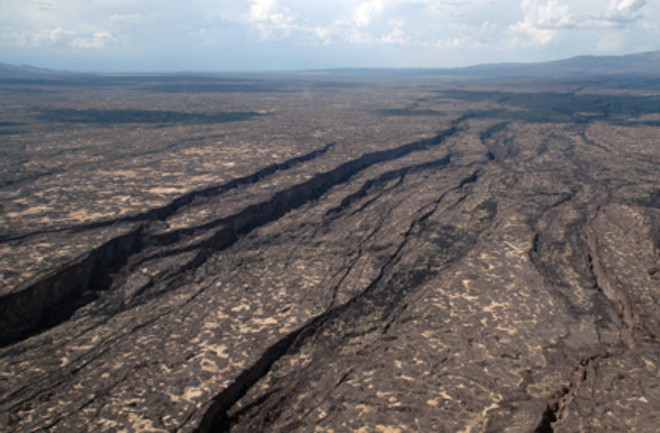 In 2005, the earth cracked open in Ethiopia. Two volcanic eruptions shook the desert, and a 35-mile-long rift opened in the land, measuring 20 feet wide in some places. Now a new study adds weight to the argument that the opening of this crack marks the first step in the formation of a new sea that may eventually separate East Africa from the rest of the continent. Says lead researcher Atalay Ayele:

"The ocean's formation is happening slowly, likely to take a few million years. It will stretch from the Afar depression (straddling Ethiopia, Eritrea and Djibouti) down to Mozambique" [ABC News].

The study, to be published in the journal Geophysical Research Letters, explains that the seismic movements observed in Ethiopia are very similar to the changes wrought by faults and fissures on the seafloor, where the processes that move tectonic plates usually begin. Seismic data from 2005 shows that the rift opened in a matter of days.

Dabbahu, a volcano at the northern end of the rift, erupted first, then magma pushed up through the middle of the rift area and began "unzipping" the rift in both directions, the researchers explained in a statement today. "We know that seafloor ridges are created by a similar intrusion of magma into a rift, but we never knew that a huge length of the ridge could break open at once like this" [LiveScience]

, says study coauthor Cindy Ebinger. The active volcanic region in Ethiopia's Afar desert sits at the boundary of the African and Arabian tectonic plates, which have been gradually spreading apart for millions years; the new study shows that large-scale seismic events can speed up that process. The gradual separation has already

formed the 186-mile Afar depression and the Red Sea. The thinking is that the Red Sea will eventually pour into the new sea in a million years or so [LiveScience].