Some claim an earthquake caused this mud river, but new research says otherwise. 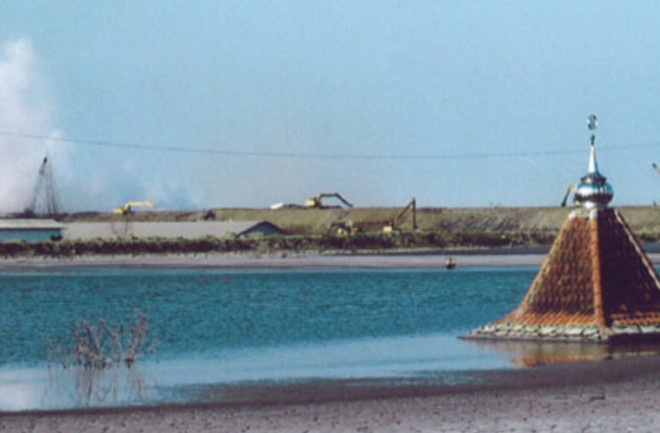 A mosque in East Java, all but buried by the mud volcano. | Mark Tingay

Two years ago a mud volcano began erupting near Sidoarjo in East Java. As of August 2008, it was still spewing some 130,000 cubic yards a day into what is now a steaming lake of hot mud, 60 feet deep and nearly three square miles in area. Twelve villages have been affected, and at least 36,000 people have been displaced.

Some say the cause was an earthquake that occurred two days earlier and 155 miles away. Others, including Mark Tingay, a research fellow at Curtin University of Technology in Perth and the lead author of a study published in Geology [subscription required] in August, are fairly certain that the eruption was the result of an underground blowout in a natural gas well being dug nearby. They argue that the blowout fractured overlying rock and allowed fluid to escape to the surface. And that happened, they say, because of poor management of the well casing that is supposed to prevent such events.

“We tested each mechanism,” Tingay says, “and we show that the order of magnitude of the earthquake was too small to cause it. We can’t prove the cause was the drilling, but it most probably was.”

Reuters reported in August that the Indonesian government has ordered the company doing the well work to contribute $415 million toward compensation. When 74 scientists voted on the cause of the volcano at a meeting of the American Association of Petroleum Geologists in October, 42 said drilling was the trigger, 16 thought the evidence inconclusive, and 13 favored both drilling and earthquake. Only 3 voted for the earthquake.