#35: Scientists Find the Key to Bringing Dead Zones Back to Life

Phosphorus levels can make or break a lake, it turns out. 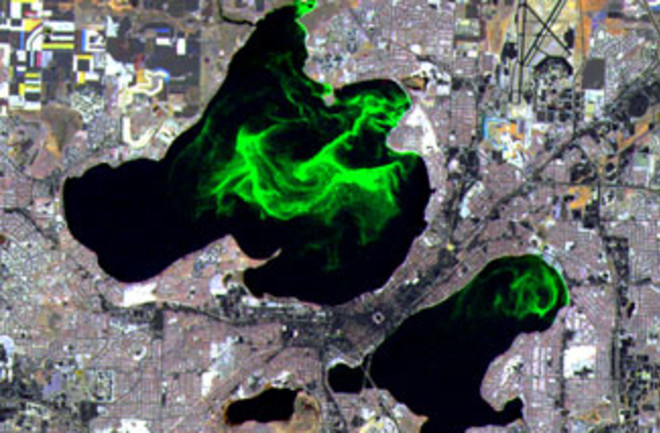 For years scientists have known that nitrogen and phosphorus, which commonly enter freshwater lakes in chemical fertilizers, play a role in eutrophication—the process by which algal blooms, turbidity, and oxygen deficiencies turn a lake into a dead zone, largely devoid of animal life. A recent paper, published in August in Proceedings of the National Academy of Sciences, presents a more nuanced picture. In a 37-year experiment with a lake in northern Ontario, scientists demonstrated that controlling phosphorus in particular is the key to reversing eutrophication.

The researchers polluted the lake with nitrogen and phosphorus over the years, gradually decreasing the amount of added nitrogen but keeping the input level of phosphorus constant. For the last 16 years they added only phosphorus. Algae continued to flourish in proportion to the amount of phosphorus dumped into the water, even without nitrogen.

The experiment revealed the dynamics of eutrophication. Cyanobacteria, the blue-green algae responsible for the most common algal blooms, are nitrogen fixing—meaning that they get nitrogen from the air. So eliminating nitrogen from the water by controlling nitrogen-based fertilizer doesn’t solve the problem. “Nitrogen is important in determining which species grow,” says Robert Hecky, a coauthor of the paper and a professor of lake ecology at the University of Minnesota at Duluth. “If we just control nitrogen, we’ll merely shift the balance in favor of the species that can fix nitrogen, giving the same algal biomass.” To bring dead zones back to life, phosphorus must be controlled.