Last month was the second-warmest November on record. This assures that 2019 will rank as the second warmest year since humans started keeping track. 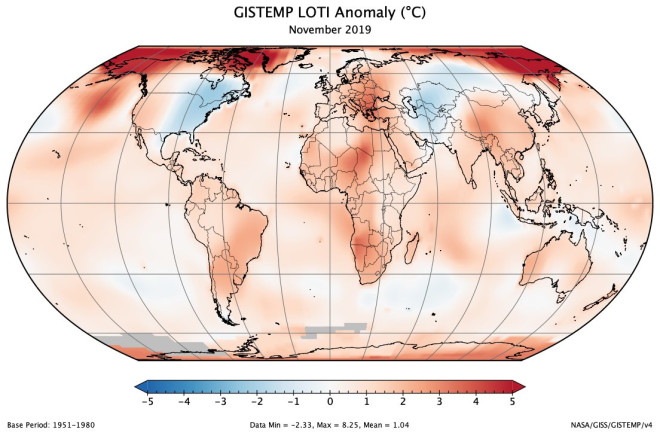 Here's how temperatures around the world varied in November from the long-term average. (Source: NASA/GISS)

That's according to independent analyses from NASA and the National Oceanic and Atmospheric Administration.

With November now in the books, 2019 stands a 99.9-percent chance of coming in as the second-warmest year in instrumental climate records dating back to 1880. And that, according to Gavin Schmidt, director of NASA's Goddard Institute for Space Studies, assures that 2010 through 2019 will take the dubious title for warmest decade so far.

Earth's surface temperature has risen dramatically since the end of the industrial revolution in the late 1880s. It is now about 1.2 degrees Celsius warmer than the 1880-1920 mean. (Source: Makiko Sato & James Hansen, Climate Science, Awareness and Solutions at Columbia University Earth Institute)

If you happen to live in the eastern half of the contiguous U.S., however, you might be scratching your head. As the November temperature anomaly map at the top of the story shows, that part of the nation was unusually cool. Folks in Siberia and places to the south had a similar chilly experience in November.

But the map is dominated by orange and red colors, indicating that most areas of the planet were indeed unusually warm — and none more so than the Arctic.

Research has shown that enhanced warming in the Arctic, along with shrinking sea ice there, have caused the jet stream to meander more than usual. This high-altitude river of speedy air helps move weather systems from west to east. But when the jet stream meanders more, weather patterns tend to persist, including extreme outbreaks of cold, wintry conditions. Some research shows this is particularly true for autumn.

“We had a near-record year for Arctic sea ice melt this year, and that has probably increased the odds of this sort of behavior in the jet stream,” says meteorologist Jeff Masters, quoted recently in a story on NBCnews.com.

Masters was co-founder of Weather Underground, and he now writes regularly for Scientific American. In his most recent post there, he notes that the world suffered through a large number of extreme heat outbreaks during 2019.

As of Dec. 15, he writes, "all-time high temperature records have been tied or broken in 21 of the world’s nations and territories, making 2019 the second most prolific year on record for all-time national heat records."

So if you live somewhere in the swath of territory colored blue in the map above, and you are lamenting just how wintry it has been, count your blessings. And you might also imagine what it would be like if you were in Australia right now.

As Adam Morgan, a meteorologist with the Australian Bureau of Meteorology, puts it in the video above, Australia has entered "an exceptional week that’s likely to break numerous December and all-time temperature records across the country. They may even approach or exceed Australia’s warmest day on record, which currently stands at a nationwide average maximum of 40.3 degrees (Celsius), set on Jan. 7, 2013.”

So as the year 2020 approaches, we might want to buckle up. Even though El Niño is still idling in neutral, we're likely to keep lurching through extreme weather outbreaks, devastating megafires and other impacts from our continued global warming experiment on planet Earth.