20 Things You Didn't Know About... The Summer Solstice

Galileo was forced to recant his astronomical theories on the summer solstice of 1633. 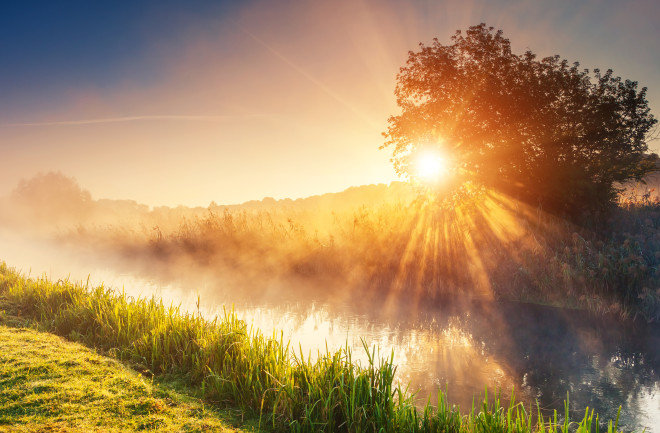 1. Summertime, and the tiltin’ is easy. Summers are hot not because Earth is closer to the sun, but because the tilt of the Earth’s axis lets rays of sunlight hit one hemisphere more directly.

2. During the Northern Hemisphere’s summer, we’re actually farthest from the sun, receiving 7 percent less sunlight than the Southern Hemisphere does during its summer.

3. The summer solstice—June 20 this year—is the Northern Hemisphere’s longest day, with 24 hours of unbroken sunlight north of the Arctic Circle.

4. For obsessive-compulsives: The site www.archaeoastronomy.com maintains a second-by-second countdown to each solstice.

5. Supporters of Seattle’s Solstice Parade, an annual fixture of the city’s artsy Fremont neighborhood, proclaim that it will “cast a spell of joy, hope, and rebirth that spreads from Fremont to the entire universe.”

6. Helping cast the spell are the Painted Cyclists, a clothing-optional group of bike riders who wear intense body makeup.

7. Watch out for those solstice rays: The Painted Cyclists’ organizers instruct participants to slather on the sunscreen, encouraging newbies to “ask Rob about his plaid sunburn from Solstice 2002.”

8. Modern-day druids, taking a more traditional approach, gather at England’s Stonehenge to mark the summer solstice. Many still don Celtic attire, even though a civilization known as the Beaker People finished Stonehenge a millennium before the Celts turned up.

9. The Tropic of Cancer—the latitude on Earth where the sun is directly overhead at noon on the summer solstice—got its name because when the ancients established it, the sun appeared in the constellation Cancer.

10.  Oops. Due to subsequent shifting of Earth’s axis, the Tropic of Cancer is now misnamed. On the current June solstice, the sun actually appears in the constellation Taurus.

11. Worse than the full moon? On the solstice of June 20, 2001, Andrea Yates killed her five children. Three years before that (June 18, 1999—also near the solstice) she tried to kill herself with an overdose of pills.

12. Galileo was forced to recant his theory that Earth revolves around the sun on the summer solstice of 1633.

13. Other planets have solstices too. By cosmic coincidence, this year Mars and Earth have solstices that fall within a few days of each other, with the Martian solstice occurring on June 25.

14. Stock up on DVDs and fire up the sunlamp: Uranus’s axis of rotation is nearly aligned with the plane of its orbit, meaning that each pole on Uranus experiences a 42-year-long summer of steady sunshine—followed by a depressing 42 years of winter darkness.

15. At the other extreme, Venus’s and Jupiter’s poles are almost exactly perpendicular to their orbits. Because of that, their solstices—hence their seasons—are barely noticeable.

16. Then again, you would have difficulty noticing any kind of season on Venus because you would be simultaneously suffocated, crushed, and cooked at 870 degrees Fahrenheit. On Jupiter it would be worse: You would be killed by radiation long before you got close.

17. Even without seasons, changes in the sun affect the planets. Sunspots wax and wane on an 11-year cycle; at times of peak sunspot activity, such as the year 2000, the sun is 0.07 percent brighter than during periods of low activity.

18. And the sun keeps getting brighter. Models of stellar evolution estimate that the sun is about 40 percent more luminous today than it was when the Earth formed 4.5 billion years ago.

19. No more summer beach vacations. Some 1 billion to 3 billion years from now, the sun’s increasing intensity will boil away Earth’s oceans, turning our planet into an endless desert.

20. So maybe the ancient Greeks had the right idea, pulling out all the stops for the winter solstice instead. On the festival of Lenaea, according to legend, a band of women would seize a man representing Dionysus (the god of wine-fueled revelry), rip him to shreds, and eat him.