20 Things You Didn't Know About Seasons

Thank our wobbly planet for our seasons, which have led to remarkable adaptations in animals ranging from honeybees to lungfish. 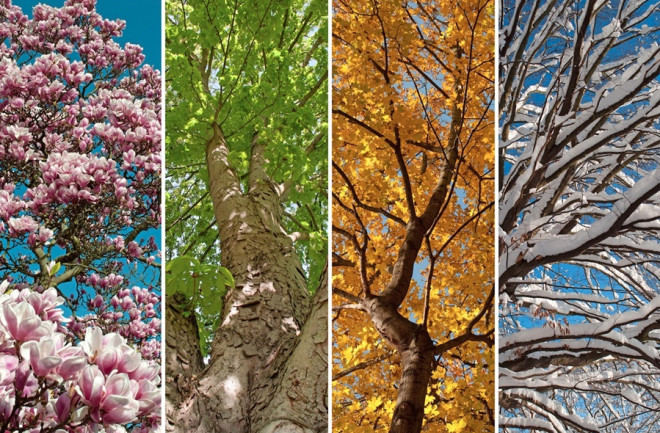 1. Don’t look to Pete Seeger’s lyric “turn, turn, turn” to explain the seasons. It’s really tilt, tilt, tilt. Earth has seasons because its axis is tilted about 23.5 degrees, exposing the Northern and Southern hemispheres to fluctuating amounts of direct sunlight during the year.

2. Contrary to popular belief, Earth’s distance from the sun, which changes along its elliptical orbit, has nothing to do with seasonal differences in temperature and sunlight. (That orbit shifts over a roughly 100,000-year cycle, however, and, at its most extreme, may increase solar radiation by up to 30 percent, affecting overall climate.)

3. Most astronomers believe that, about 4.5 billion years ago, a Mars-size body knocked into our young planet, causing the axial tilt. By the way, that tilt, or obliquity, varies over a roughly 40,000-year cycle, from 22.1 to 24.5 degrees.

5. Scientists don’t yet know how common wobbly planets like ours are, but Earth’s seasonality may help them find signs of life elsewhere, according to a 2018 paper in The Astrophysical Journal Letters.

6. Current exoplanet analyses look for atmospheric oxygen, methane and other gases necessary for, or produced by, living organisms. But hunting for these so-called biogenic gases is imprecise and assumes life-forms have metabolisms similar to earthly beings.

7. A more reliable exoplanet biosignature, say the authors of the 2018 research, might be seasonal changes in atmospheric composition, which reflect the connection between the planet and the life adapted to live on it.

8. On Earth, for example, carbon dioxide levels are lower in summer, when most plants are actively absorbing it, than in winter, when vegetation dies or goes dormant.

9. Animals, meanwhile, have a host of seasonal adaptation strategies, such as migration, which may mean a change in altitude, latitude or hemisphere. Birds are perhaps the most famous migrators, including the Arctic tern, which flies from far northern breeding grounds to Antarctica and back again every year.

10. Many marine animals also migrate, even if they don’t move geographically. Seasonal changes in oxygen levels force many fish, crustaceans and mollusks to relocate higher or lower within the water column.

11. All four species of African lungfish, however, stay right where they are, even in the dry season when their freshwater habitats may disappear. They survive thanks to estivation.

12. Like hibernation, which is an adaptation strategy for prolonged cold, estivation is a state of lowered metabolism and inactivity — but it occurs during hot or dry seasons.

13. Depending on the species, African lungfish estivate after burrowing into the soil to find permanent moisture, or even secreting their own comfy mucus onesie.

14. Some insects have evolved seasonal variation within a single population. Take Apis mellifera, the Western honeybee, for example. In temperate climates, worker bees born in spring and summer live for a few weeks, rearing brood and foraging for nectar and pollen.

15. In the same colony, however, winter workers — which emerge as foraging opportunities decline in autumn — may live for six months or more. These winter bees spend most of their time in a cluster around the queen to keep warm.

16. The seasonal difference in life span is linked to vitellogenin, a protein in hemolymph, the honeybee equivalent of blood. Winter bees have significantly higher levels of the protein, which may sustain them.

18. The research focused on microbiome changes during the two tropical seasons: wet and dry. Globally, not just in the tropics, climate change is exacerbating these extremes.

19. Released in November, the Fourth National Climate Assessment noted the wildfire season in the U.S. has already lengthened, in part due to prolonged drought. The period of risk is also expanding in many other countries as the planet warms, largely because of human activity.

20. The global cyclone season, meanwhile, has become more intense in the Atlantic and shows signs of increasing activity in the Pacific. Let’s hope Seeger was right after all about all that turn, turn, turning: “I swear it’s not too late.”