12,000 Tons of Orange Peels Bring a Jungle Back to Life 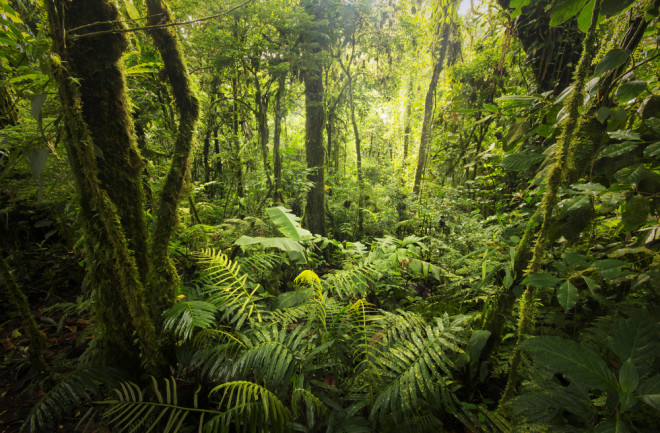 Twenty years ago, a pasture in Costa Rica was nearly barren farmland, choked by invasive grasses. Today, it blooms anew with a rich tangle of jungle plants. The magic ingredient for this resurgence? Oranges.

In the mid-1990s, Del Oro, a newly established orange juice manufacturer in Costa Rica was looking for a way to get rid of the rinds and pulp left over after juice extraction. They planned on building an expensive processing plant, but two ecologists from the University of Pennsylvania approached them with a different idea. If the company would donate some land it owned adjacent to a national forest they could dump their organic waste on degraded areas nearby. A pilot program yielded rich black loam and a diversity of new plants, and in 1998, the company unloaded 12,000 metric tons of orange waste onto the forest.

The promising program would be cut short, however, by a lawsuit filed by a rival juice company, which eventually shut down the composting project on the grounds that it was defiling a national park. Today, that “defiled” land is a verdant patch of jungle standing in stark contrast to the sparse pastures it lies next to. A new study from researchers at Princeton and the University of Pennsylvania analyzed the health and composition of the small area and found a nearly 200 percent increase in woody biomass and three times as many species as a control area next door.

At one time a field for grazing, the area was initially overrun with African pasture grasses, leaving little room for native plants. Once spread with orange rinds, however, the grasses were smothered and the loamy, nutrient-rich soil that the rinds produced provided fertile ground for native plants to take hold. The pressed oranges were actually perfect for the task because they had been leached of essential oils and acids, which would normally harm plant life.

Instead, the orange treatment injected essential nutrients like potassium, nitrogen and, especially, phosphorus — which they found little of in the soil, indicating it had all been used up — into the soil. Aside from the initial disposal, the researchers didn’t intervene in the area — the rest was all Mother Nature.

Soil samples, published last month in the journal Restoration Ecology, yielded significantly elevated nutrient levels, which persisted even as late as 2014, when the last round of sampling took place. There were 24 species of tree in the treated area, compared to eight in the control, and the composition of species was much more balanced. The shade cover was more complete, and the researchers say that they didn’t even begin to count things like woody shrubs, vines and other smaller species. In short, it looked like a jungle again.

“In the area surrounding where the orange peels were deposited, the few trees that we found were almost all just two species of pasture-associated trees that are not typically found in the mature forests of that part of Costa Rica,” says co-lead author Tim Treuer, an ecology PhD student at Princeton. “In the fertilized area there was a much greater diversity of trees, including many species that are typically only seen in older forests. Not only did the orange peels jumpstart the return of forest, but they’ve already triggered the return of a rapidly maturing forest.”

While the application of agricultural waste to denuded jungle lands is essentially a win-win situation for all involved, it may not always produce such amazing results. It worked here because the orange peels were able to effectively block out an invasive species and produce thick loam for new growth. In other environments, simply dumping organic waste may not provide the kind of blank slate it did here. In addition, Costa Rica is warm and humid year-round — similar tactics might not be as effective in places where it’s below freezing part of the year.

Still, the project didn’t produce any of the pollutants or pests detractors worried it might, and the results are clearly visible. There are unfortunately no plans to continue the project at the moment, Heuer says, a result he blames on the decades-old lawsuit. There is a similar experiment in the country involving coffee cherries, he says, though it doesn’t seem to have produced any results yet.

Oranges, it seems, are part of an essential diet for more than just humans.